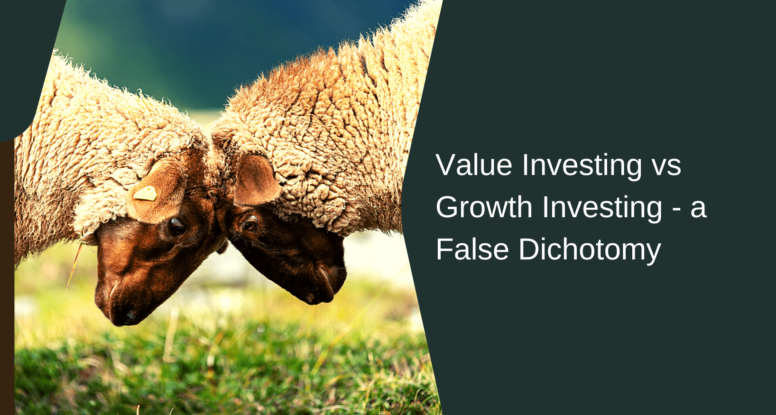 This article on value investing vs growth investing was written by Phillip Richards, a small investor managing his own personal account. He has a Master's degree in Planning and Real Estate and is a deep value investor based in England. In 2014, Warren Buffett explained that the net nets he bought in the 1960s helped him achieve the highest returns of his career. Download the 4 rare articles written by Warren Buffett himself that cover his highest conviction picks in the 1950s in How To Choose Deep Value Stocks Like A Young Warren Buffett for FREE right now. Click Here. Article image (Creative Commons) by Carandoom, edited by Net Net Hunter.

There is endless debate about value investing vs. growth investing and which philosophy is best. Both sides make impressive claims, but one comes out as the clear winner for the small investor!

So, has value investing been left for dead, or is there life in the old dog yet?

What is The Difference between Growth and Value?

Value investing seeks to find the diamonds in the rough, whereas growth investing tries to find the elements before becoming a diamond. Growth stocks are predicted to outperform the market due to future potential. In contrast, value stocks trade below their intrinsic value and provide returns when re-valued by the market.

Value stocks are assumed to be heading down the drain and are not to be touched. Growth companies are thought to grow forever with an unquenchable total market to address.

Growth is identified by their high growth rates, strong return on equity, favorable pre-tax profits, and lots of room to grow. Think of growth companies such as Facebook, Amazon, Apple, Netflix, and Google, the FAANG stocks.

On the other hand, value stocks can be found on the 52-week low list and are companies that have fallen out of favor due to some event, setback, or secular decline. Examples would be ExxonMobil, JPMorgan Chase, and Wells Fargo. Value stocks are not glamorous and won’t get discussed at dinner parties but herein lies the potential.

Value Vs. Growth investing - Is One Better Than The Other?

Investment is a lifelong activity and the sooner you can get started with a successful strategy the better. This allows the magic of compounding to take full effect and will lead to a comfortable retirement. But is one approach to investing better than another?

But in reality, it depends on your investment goals as well as your temperament. Both have been shown to lead to outperformance at various points in history. To understand which is better and why, you first have to know the philosophy behind each strategy.

First up, Classic Value Investing is the practice of buying companies for dirt cheap relative to an ultra-conservative valuation and standard ratios such as P/B, P/E, and P/NCAV. Classic value doesn’t specifically look for great businesses but seeks statistically cheap stocks.

It is preferable to buy a quality business, but this is not the focus of classic value. Benjamin Graham - the father of value investing, was indifferent about buying a quality business; if one happened to be statistically cheap, then so be it.

Graham would never place much trust in future growth prospects; the future is unknown and uncertain. Buying a company at a discount to its current assets is real and tangible. Simply put, the focus of traditional value investing is purchasing a dollar for much less than it is worth. Classic value investing, if done correctly, is ultimately profitable over the long term.

“Most analysts feel they must choose between two approaches customarily thought to be in opposition: “value” and “growth.” Indeed, many investment professionals see any mixing of the two terms as a form of intellectual cross-dressing.

We view that as fuzzy thinking (in which, it must be confessed, I myself engaged some years ago). In our opinion, the two approaches are joined at the hip: Growth is always a component in the calculation of value, constituting a variable whose importance can range from negligible to enormous and whose impact can be negative as well as positive.”

This modern approach is in sharp contrast to Buffett’s early days being more of a Classic Graham Style Value Investor. In the partnership days, while managing small sums of money, Buffett leaned heavily towards purchasing marginal businesses selling at favorable financial ratios. Berkshire Hathaway itself was an example of a marginal company of questionable quality.

Buffett's approach today is centered around the concept of buying wonderful businesses at a fair price. The company must have a durable competitive advantage or a "moat," which can hold off the competition, protecting their profits and margins. Firms with moats have high returns on capital, superior profit margins, and predictable cash flows.

The justification for paying up for wonderful companies is that they continue to grow into the future producing free cash flow converted into owner earnings. With modern value investing, you are counting your gold before being minded out of the ground, but you're sure it will be at some point in the future.

While Buffett makes this approach seem simple, it is not easy and requires outstanding temperament and skill. The quality value approach is notably different from how Warren Buffett created his fortune but came as a necessity of a growing capital base. Buffett’s notoriety has made this approach to investing as popular as he is. But such investing could suck investors into the Warren Buffett trap and ultimately unacceptable returns.

So how exactly did Buffett make his initial fortune?

“The many dozens of free puffs I obtained in the 1950s made that decade by far the best of my life for both relative and absolute investment performance.”

During this period, Buffett’s returns were extraordinary, achieving an annual compound growth rate of 29% for over a decade. But as is the case with any investment technique, there are drawbacks to consider.

Problems and Advantages of Growth and Value Investing

Growth stocks have been on a significant run over the last decade, thriving in this low interest and accessible debt environment. But growth is not without fault. Growth investing tends to happen in boom and bust cycles.

This leads to a tendency to get sucked into bubbles such as the dot.com frenzy of the ’90s. As growth stocks are offered at higher multiples, which contract when growth fades, and the bubble pops, large losses can occur quite rapidly. Therefore, a robust emotional temperament to keep from holding a growth stock longer than you feel you should is required. Finally, with growth investors, it can be hard to tell the difference between luck from skill.

Markets are most definitely greedy at this moment in time.

Value investing is also not without its flaws. It has extended periods of underperformance, with recent history being a prime example. It also takes a firm conviction to wait for the value to unlock in the investment with all the negativity and social pressures associated with investing in such companies. You will also need a robust emotional temperament to buy "scary" beaten-down stocks. However, if value worked all of the time, everyone would be a value investor, and its outperformance would cease to exist.

The recent track record of Value vs Growth does little to settle the debate. Over the past decade, as a whole, value stocks have not performed as well as growth stocks. Investors tend to extrapolate the recent past, value may be on the ropes, but it's not down yet!

There is no question that value stocks have empirically outperform growth stocks over the long term. But recent history suggests that growth is now firmly in control with no end in sight to when value will return to outperformance.

Nonetheless, Ibbotson's research demonstrates that value stocks have destroyed growth stocks over 40 years from 1968-2008. The findings show that this is the case for small, mid, and large-capitalization stocks.

Similarly, Fama and French again looked at the performance of value vs. growth stocks in various markets across the world. They discovered that value stocks outperformed in twelve of the thirteen markets. The study was conducted over 20 years from 1975 to 1995 and the debate still rages on.

Building on this research, Bauman, Conover, and Miller corroborated the evidence and found that value stocks outperform growth stocks in 21 international markets over 10 years.

More recent research conducted by John Dowdee demonstrated that from July 2000 until 2013, value stocks outperform growth stocks on a risk-adjusted basis for all three levels of capitalization. This outperformance was evident, although the value stocks were notably more volatile than the growth samples. However, over shorter periods, growth tends to outperform. This helps to explain growth's current surge of late.

A 90-year study conducted by Bank of America and Merill Lynch found that value produced an average return of 16.7% annually. Growth stocks still performed better than the benchmark but did not keep up with value, reporting a 12.4% annual return. To be fully transparent, this study found that growth stocks outperformed value when the economy was contracting but concluded that value wins out over the long term.

Oppenheimer concluded that over 13 years from 1970 - 1983, a net-net style of value investing returned a compound annual growth rate of 28.2% compared to the Small Firm Index 19.6% (excluding dividends). Vu's study confirmed this impressive record with a 38.5% return at the end of 12 months versus 15.5% for the NYSE. A later study conducted again by Vu confirmed his previous findings and that smaller firms performed even better than the larger counterparts. In addition, Oxman and Montier's studies also demonstrated the impressive returns on offer with value investing and, more specifically, net-nets finding returns of 35.5% and 35%, respectively.

Despite a significant weight of evidence to demonstrate that value outperforms growth over the long-term, it is the latter that seems to dominate the investment environment – the siren song of barriers to entry, unquenchable demand, earning upgrades, and secular tailwinds are seemingly seductive to investors.

Key Takeaways From the Research

There is a false dichotomy between growth and value investing. It would be foolish to seek growth or value individually when investing but more foolish to pay over the odds for growth. Most investors separate the two approaches when in reality, the best cheap stocks are both dirt cheap and attached to growing companies.

As Buffett states: "In our opinion, the two approaches are joined at the hip: Growth is always a component in the calculation of value." It's important to remember that all real investing is determining if what you are buying is worth more than what you are paying. Trying to divide your investment decision into value vs. growth leads to fuzzy thinking.

It is best to start from a value orientation and focus on the downside rather than getting carried away with the hype. A wonderful business doesn't necessarily mean it will make a good investment, and given the research above, it's likely not to be. As a value investor, you can expect a reasonable return with limited downside, and if the future of investing rhymes with its history, you are likely to get wealthy over the long term. What more can a reasonable investor hope for?

If you want to avoid being consumed by the value vs. growth argument, it is best to build your character and focus on what has worked in investing over the long term. Undoubtedly, that is Benjamin Graham's Net Net Stock Strategy.