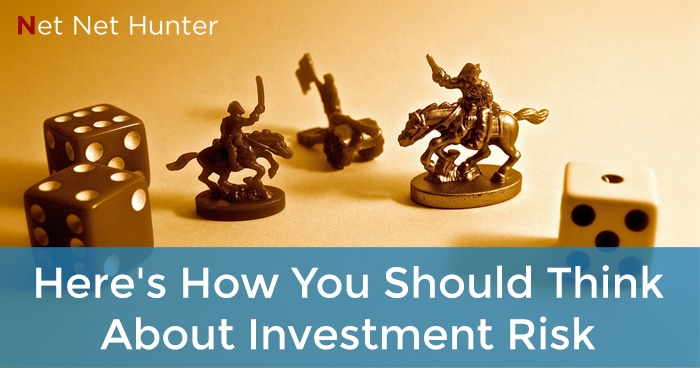 Here's How You Should Think About Investment Risk

The following is a guest contribution by Net Net Hunter member Tobias Meier and may not reflect the opinion of others at Net Net Hunter.

Risk is an important factor to consider when investing. Hardly anybody would argue with that.

In academia, volatility is traditionally considered to equal risk. That’s elegant because it can be measured and presented with seemingly intelligent formulas, ratios and Greek letters. Great for high achiever cocktail parties!

Beta measures the volatility of a stock relative to the market.

For a long-term investor with no leverage, that’s probably not a useful concept of investment risk. In fact, many stocks that value investors buy have seen major declines in price, therefore have higher Beta after the decline than before. A lot of value investors see their stocks decline a little further after their purchase over the short-term, but nobody forces them to sell at that point. Volatility is not necessarily bad – it provides opportunities for a disciplined investor.

Why did they ever come up with the idea of volatility as investment risk? Aside from the intellectual elegance, the notion of volatility equaling risk has a certain intuitive appeal, considering the emotional stress that volatility usually causes. According to research, the pain of the average investor when losing $1000 is twice as intense as the positive emotion when winning $1000.

It could be argued that, given the fact that most people can’t stand volatility, the likelihood of them pulling money out (at the wrong moment) is increased. The higher the volatility in their portfolio, the lower their actual realized return, as a consequence. This phenomenon also presents a very real business risk for a money manager, because investors susceptible to emotional swings may pull money out of the fund, causing the manager to lose clients and forcing him to sell otherwise attractive positions at low prices to allow investors the chance to cash out.

However, this is a poor explanation for why a stock is "objectively riskier" as an investment if it is more volatile. And, by the way, aren’t humans supposed to be completely rational according to economists - making this whole point obsolete?

I rest my case…

What could be a useful concept of investment risk for a more serious investor?

According to legendary value investor Seth Klarman, risk can be defined as:

1 Magnitude of a loss

In James Montiers research, the probability of permanent loss of capital (a decline of 90% or more within a year) was shown to be 5% for Net Nets versus the 2% for all stocks in general. As a group though, Net Nets suffered less down years than the total universe of stocks globally.

But, what about these drawdowns? Aren’t they larger for Net Nets?

Not necessarily. Net Nets tend to suffer less in a bear market than a stock market index such as the NASDAQ, and can often even produce positive returns during these periods. 2008/9 may have been an exception to this rule, but this outlier is hardly an argument against Net Net investing or value stocks in my opinion.

Personally, I am a proponent of a diversified portfolio that gives me the best chance of high returns over a multi-year period regardless of what sort of market periods lay ahead. My personal concept of risk is the likelihood (and possible magnitude) of not meeting my objective. And, while you may find this surprising, the likelihood of one stock going to zero is of minor importance to me. It's the range of expected probable outcomes of the whole portfolio that counts. After all, Graham claimed that Net Net investing was both safe and extremely rewarding on a group basis.

Still, most investors will fixate on single stocks, an investment mistake known as narrow framing. They can’t stand being wrong. It’s only human. That’s one of the reasons why deep value investing is surprisingly hard and more conventional strategies often seem more appealing.

Investors have a hard time being unconventional. Warren Buffett wrote that being conventional is often confused with being conservative. There’s a lot of talk lately about quality companies with stable yields being the best choice in today’s low interest rate environment. Often though, « quality » isn’t objectively quantified, it just means big and popular – conventional rather than conservative. And even with high quality businesses, there will come a point when investors overpay, expecting past returns to be sustainable, when in fact they aren’t - a high-risk bet in my book. Lemming investors would be well advised to read about the stellar rise and fall of the high-quality Nifty-Fifty stocks in the 1970s. This time it’s different, you say? Yeah, right…

At least, the risk of standing out is quite low that way. After all, investment risk is a somewhat subjective issue, but should be put into context with objectives. Be aware of your goals and motivations, both obvious and hidden ones.

Ed Seykota, one of the most successful traders of all times, says that, win or lose, everybody gets what they want out of the markets. A provocative statement? Maybe, but I’d argue that there’s more truth to that statement than first meets the eye…