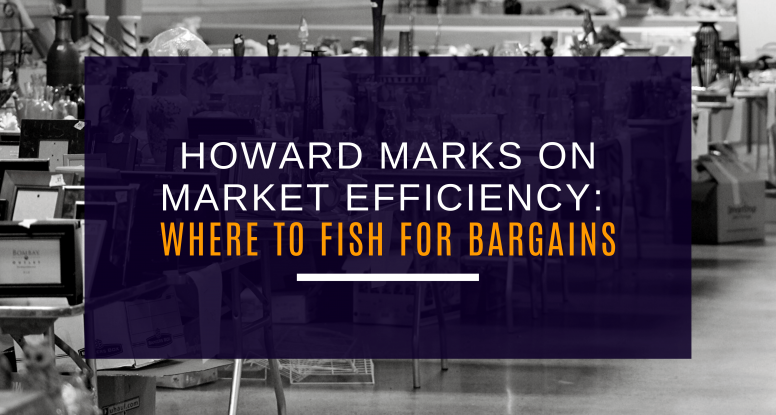 Howard Marks on Market Efficiency: Where to Fish for Bargains

This article on Howard Marks and market inefficiency was written by Luis Sánchez. Luis is a lawyer and investment manager based in Bogotá, Colombia, who is primarily focused on net net stocks. He uses Net Net Hunter's high performance net net checklist to identify his stocks. Download our net checklist right now for free. Click Here. Article image (Creative Commons) by Junior League of Knoxville, edited by Net Net Hunter. Acknowledgements to Eoin Ó Nualláin for his help on the article.

In a world filled with “award-winning” short-term trading strategies and “get-rich-quick” schemes, it can be very difficult to know where to turn for true investment advice.

It is fortunate for us then that there exists a man who not only knows of a sustainable way to make money in the long run, but has also decided to share this wisdom with us by writing about it!

That man’s name is Howard Marks, a hedge fund manager whose advice is most valuable to small private investors managing less than $10 million.

What follows is some of Marks’ best advice regarding where to search for fertile investing grounds.

Value investors reject the notion of an efficient market, but this attitude hurts their performance. Reality is more nuanced than that.

The efficient market hypothesis (EMH) states that asset prices in public markets represent accurate estimates of their intrinsic values — i.e., there are no under- or overvalued stocks or bonds — because they reflect all the information available in the market.

The EMH relies on the following premises:

Academics who support a “strong” version of the EMH contend that markets reflect all public, non-public, past and future information, while supporters of a “soft” EMH argue that asset prices only reflect public and past information.

The most important conclusion of the EMH is that investors can’t beat the market in the long run, no matter how much effort they put into it.

Of course, if the EMH is true, then value investors are just wasting their time, and Warren Buffett, Benjamin Graham, Walter Schloss, Peter Cundill, Howard Marks, and all the other value investors who have beat the market for long periods of time are just lucky.

All value investors reject the EMH, but then again, only about 6% of money managers actually beat the market every year — and the percentage that outperforms the market consistently in the long run may be even smaller.

He argues that any asset class that is (a) widely followed, (b) isn’t taboo or controversial, is (c) comprehensible, and (d) publishes information widely will usually be fairly priced.

“...it is fair to conclude that if thousands of rational and numerate people gather information about an asset and evaluate it diligently and objectively, the asset’s price shouldn’t stray far from its intrinsic value.”

This basically means that, in Marks’ opinion, you won’t find big mispricings among equities on the New York Stock Exchange — or any other major stock exchange, for that matter.

Should value investors just stop trying to beat the market, then?

Howard Marks on Where to Fish for Bargains

Marks argues that market efficiency is what lawyers call a “rebuttable presumption,” or something that is true in principle unless proved otherwise — e.g., in a criminal case, the defendant is presumed innocent unless proven guilty in a trial.

Marks concludes that investors should look for places where the premises of the EMH don’t actually hold and exploit the inefficiencies that are likely to appear there.

Remember the second premise of the EMH? That all investors were “objective”?

Thus, during market bubbles, out-of-fashion businesses are a good place to start looking for bargains. There’s a catch to this strategy, though. Can you actually tell where bubbles are — and therefore, where overlooked assets are — before they pop?

But what about that last premise of the EMH? That, for any market to be efficient, all investors should be able to buy, sell, and short any asset class?

Well, in theory, that premise is true in most public markets, but in practice it isn’t. For instance, take the micro and nano-cap universe. Micro-cap stocks are firms with market caps below $300 million. Nano-caps have market caps below $50 million.

Let me start by pointing out that mutual funds have to manage at least $1 billion to survive — assuming a 1% management fee, that’s an annual $10 million income to pay administrative salaries, rent in a fancy building, marketing expenses, a Bloomberg terminal, and a group of analysts, plus compensation for asset managers. Also, keep in mind that these funds usually hold less than 10% of any given firm in their portfolios for regulatory reasons — a 10% or greater stake requires the firm to publicize the holding and become active shareholders, among other uncomfortable things.

In sum, for structural reasons, mutual funds — let alone hedge funds — don’t even bother analyzing micro and nano-caps. While, in theory, professional money managers could buy micro and nano-caps, in practice they can't. Because the “smart money” can’t go there, the micro and nano-cap universe is the most inefficient corner of the stock market.

For professional value investors managing large sums, this just means mispricings remain scarce in their playing field — i.e., stocks above $300 million —, and that only superior analysis, timing, and patience will render higher returns for them in the long term. It’s tough out there.

But for small private investors — i.e., individuals managing between $10 or $20 million — this is great news!

Hunting for Net Nets Among Small and Nano-Caps

First of all, global capitalism is a highly competitive environment, and small firms are usually less resilient than large firms during recessions and credit crises. Also, larger firms usually attract highly qualified managers, making it harder to find able managers among micro caps. What’s more, in most public markets around the world, micro and nano-caps are allowed to publish little financial information, and accounting frauds and stock price manipulations are more common among them than among larger firms.

But don’t lose hope just yet. At Net Net Hunter, we are well aware of the risks involved in investing in micro and nano-caps. For this reason, we’ve developed a very strict set of criteria called the Core 7 Scorecard to filter this universe of very small firms and actually find high quality companies among them.

Our first and most important criteria is price. We screen the market for stocks selling below net current asset value (NCAV) — i.e., the value of current assets less all liabilities — also known as “net nets.” These dirt cheap stocks were Ben Graham’s favourites because he earned 20% per year for more than two decades just buying hundreds of them. Such a low price gives investors a very wide margin of safety.

On the other hand, there’s enough evidence suggesting that firms with most of their assets or operations in China are more prone to fraud and scams than stocks in other countries, so we just exclude them from our shortlist. We also exclude companies with high debt-to-equity (DE) ratios because high financial debt usually leads to bankruptcies when businesses hit a rough patch.

High insider ownership is a big plus. If managers of these small firms have “skin in the game,” we are more inclined to invest in them. We also like it when these insiders are busy buying huge amounts of stock at dirt cheap prices.

On the qualitative side, we really like to see a catalyst in place that will probably unlock the value of the stock in the foreseeable future. The ideal net net would be one selling below NCAV, with growing earnings and a unique business model. These rarities often end up being multibaggers, but they’re obviously scarce.