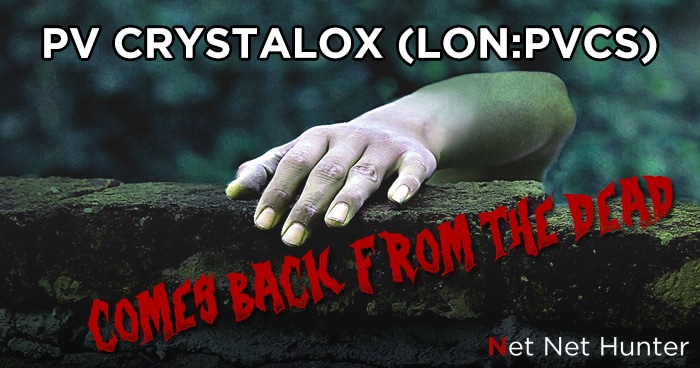 In the fall of 2015, PV Crystalox’s operations couldn’t have looked more desperate.

The loss per share was the greatest the firm had ever seen, China was dumping solar wafers on the markets, the company was locked into a contract to purchase raw materials at above market prices, which was chewing up cash. To top it off, the company had just ran a negative €15.6 million operating cash flow.

Management’s letter to shareholders was somber, reflecting the dark period the firm was in. Survival of the company was in question, and to sort out whether the business should continue as a going concern they pushed forward with a comprehensive strategic review.

PV Crystalox was unprofitable, but it was far from sliding into bankruptcy. In fact, the stock was a major investment opportunity because it was priced below net liquid assets and debt was minimal. In early 2015, the stock was priced at just 33% of net current asset value - a massive 66% discount to liquidation value. This liquidation value was stable, as well, posting a very small burn rate form year to year. From 2014 to 2015 management reduced current liabilities by €14 Million, and almost a complete reduction of non-current liabilities. Minimal debt ensured that, if the company liquidated, more money would be going to investors. To top it off, the firm was losing less money year over year and was nearly breaking even.

It was clear that PV Crystalox had huge upside potential but risks remained. A well-run company should withstand a rough economic situation and management seemed to be taking the steps needed to save the business. Given how bleak the macro environment looked in the solar industry, the shares had been beaten down to ridiculously low levels. While there was no guarantee that losses wouldn’t increase, of that the firm’s liquidation value wouldn’t erode, investors would have been able to profit no matter what the strategic review found. Management already had a habit of returning capital it didn’t need back to shareholders, so if management found that the business wasn’t viable as a going concern, they would wind up the business and distribute the liquidation value to shareholders. On the other hand, if they found that they could run the business profitably going forward, profitability would return and the company’s shares would surge. In either case, shareholders buying in at the stock’s massive 2/3rds discount to liquidation value were likely to see their stake rise as much as 200%.

In early 2016, a crack of light appeared on the horizon. Management, reached a mutual agreement to end the hugely damaging fixed price purchase agreement with their supplier of polysilicon, which freed up cash. A large driver of operating losses that the company was subjected to was now eliminated. Management also decided to shut down an under-utilized wafer factory in Japan, refocusing on their plant in Germany where conditions were more favorable. Over the next 3 months, net cash increased €12.1 Million.

Investors took notice. In February, the stock gradually began to climb back up from its low of 7.5p. By April, the stock had made its way back up to 13.5p, a gain of 80% off its recently lows, as investors began to realize that the firm was not going to enter receivership.

After a mind-year lull in the stock price, the firm came out with its half-year report, showing a major jump in the firm’s bottom line. For the first time since 2013, the company was back to profitability. Despite the razor thin profit margin and a warning on the firm’s business over the next 6 months, investor sentiment flipped and the stock popped 35% in a single week. over the next 5 weeks, it would continue to climb, reaching a high of just over 20 pence per share.

The story of PV Crystalox illustrates how solid cash levels and competent management can lead to a successful recovery. While cash on hand had decreased, having such large cash reserves allowed PV Crystal to pull through the slow economic conditions because the firm could pay its bills without having to turn a profit.

Management’s attempts to boost operational efficiency really helped. Cash flow increased from 2013 and revenue increased from 2014 to 2015. Total assets have decreased over the years, but that was due to management attempting to save as much money as possible by closing the Japan location creating wafers. Management also made the best of the industry’s terrible situation and the company’s obligation to buy polysilicon wafers at above market prices by reselling them on the open market, reducing inventory by 60% and freeing up cash which allowed for operating flexibility.

Financially, PV Crystalox had a gross profit of €6.2 million at the end of the first half of 2016, 4% greater than a year prior despite a sharp decline in wafer shipments. The company’s net cash position was €24.8 million, higher than their starting position of €12.7 million. While the firm’s outlook still appears rocky, management has enough cash, financial flexibility, and experience needed to maneuver the company towards solid profitability.

PV Crystalox is a prime example of how value investing works. When a firm like PV Crystalox is combined with similar companies, the results are portfolio returns most investors only dream of. Value investing takes work because an adequate amount of investigation can often reveal truly attractive situations. This process allows investors to peer under the firm’s rusty hood to see if the engine is still chugging along or if its about to sputter out and die. Wall Street isn’t interested in a company that might perform; they are looking at a company that is already performing, which leaves the door open for value investors.

Investing today is highly publicized by companies and television stations such as CNBC and Fox Business News. Everyone is chasing the next best idea, but what many fail to realize is that it takes a contrarian mindset and strong emotional temperament to produce outstanding returns. Once a “great” stock purchase hits the media, most of the value has already been extracted.

Circling back, that is what makes value investing, and net net stock investing in particular, such a desirable strategy. Value stocks are mostly ignored by the media, which leaves value for the retail investors to uncover. Never chase a stock, it’s the worst time to invest. People often do this for fear that they’ll miss out on a meteoric stock rise. Wait for a healthy pull back or an economic event and then enter at a very advantageous price.

Get the Book and Earn 25%+ Returns

It took me years to discover just how good Benjamin Graham's net net stock strategy is — the same strategy Warren Buffett used to earn his highest returns. Don't make the same mistake. Join Net Net Hunter to get quick access to high quality international net net stocks to earn 25%+ average annual returns. The money you'd make from even just one of our high quality net nets could be enough to pay for membership for years.

"I went to his site and I was amazed by the amount of content that he had. It’s really very high quality stuff. There are not a lot of websites that talk about Benjamin Graham style investing and it was like a gem in a lot of rubbish sites. So, I persuaded my business partners to sign up for a Net Net Hunter subscription and inside the membership we found even more gems — Evan talked about stocks, analyzed net net stocks in detail, and not just in a particular country such as in the US which most sites cover, he also went into the UK, Japan, all these countries uncovering net net stocks."

"Net Net Hunter makes selecting net nets really easy by having a shortlist of international stocks ready to go. The stocks are filtered through their scorecard to increase the odds of picking winners and helps you understand what process is being used."

"Net Net Hunter is a very valuable and unique service. There are very few sites dedicated to following net net stocks. This site offers investors a wealth of information on the subject as well as many potential stock opportunities to consider."

"Net-Net Hunter is excellent. It's your 'one-stop-shop' for high quality net-net opportunities across the globe. Not only is it a great place to find new net-net ideas, the community forum is a great way to surround yourself with investors who do it best. Such a great way to generate new investment ideas -- it's very impressive."

"The thought of financial independence before turning 40 had never crossed my mind. Then, I was lucky to meet Evan who has been offering guidance on how to invest. This is how I made a promise to myself to retire in under ten years. I now feel that my goal is within reach."

"I must say that it is an extremely undervalued service and something I have been looking for, for a long time! Thanks again for providing the service! Your analyses are thorough, logically sound, and approached with the right amount of conservatism."

"Although I am a finance professor and long-time value investor, I find Evan's picks save me scores of hours of research and screening work. I still do my own anaysis, but now I have a short list to use.."

"The forums are a great source of information. Members are savvy and very helpful. There are new posts every day ranging from questions to links to new information. There is new content every month and plenty in the archives. I have been a member for over a year now. I have seen some major updates over my time. Evan (the founder) has been personally very helpful..." Read Matt's Full Net Net Hunter Review

"I am a partner in a small training company, operating in North East Italy, Romania and, since 2015, in Croatia. I have started to develop my knowledge in value investment since 2011, and later especially in Deep Value thanks to Evan Bleker and Jae Jun. Unfortunately my work does not leave me enough time for research and analysis, so Net Net Hunter and its community have become a fundamental basis for my investments. I particularly appreciate Net Net Hunter's international focus and I am looking forward to the analysis of European markets because of their important opportunities for investment."