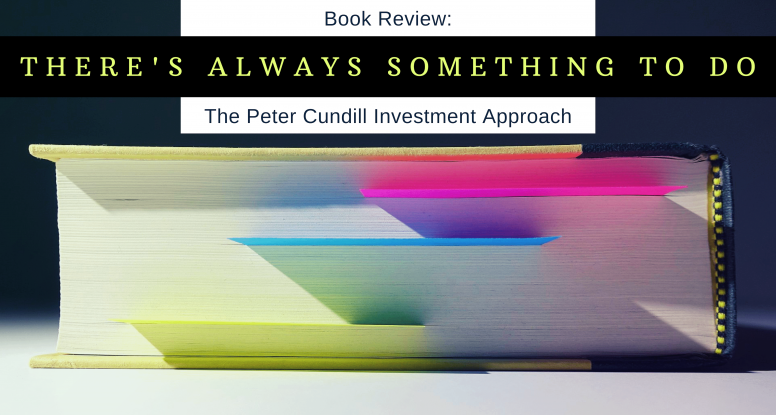 There's Always Something To Do: Book Review

This book review about There's Always Something To Do — The Peter Cundill Investment Approach was written by Evan Bleker. Evan is a private investor and the founder of Broken Leg Investing & Net Net Hunter. Article image (Creative Commons) by Dean Hochman, edited by Net Net Hunter.

Is There's Always Something To Do — The Peter Cundill Investment Approach worth reading?

There's a cult figure in the value investing world that you've probably never heard of. He has one of the best records in investment history, nailing a 26% compound annual return against a lost for the Dow Jones over a 10 year period. Few other investors have ever earned market adjusted returns just shy of 30% per year without leverage.  Even more remarkable, he did it without suffering a single down year during the worst financial period since The Great Depression, the 1970s.

Intelligent and disciplined, generous and flexible, Peter Cundill is also one of the investment world's most complex personalities. Investors are well advised to learn as much as they can about Cundill and his approach to investing. Luckily, Christopher Risso-Gill documented much of the man's life in his great book, There's Always Something to Do — The Peter Cundill
Investment Approach.

Who is Peter Cundill?

Ironically, despite his tremendous success as an investor, there's very little written about the man. Investors hungry to learn Cundill's approach are forced to sift through a handful of Canadian newspaper articles, or tributes on websites. The best source of information on Peter Cundill, though, is the 2011 biography written by Christopher Risso-Gill. The book is the only large scale work covering Peter Cundill's so is definitely a must-read for anybody interested in digging deeper into the man.

In 1975, Cundill took control of the All-Canadian Value Fund in Vancouver. The fund had suffered a massive drop in value, from $6 in 1969 to $2 in 1974. Despite the terrible performance, Peter Cundill tacked his name to the fund, calling it the "Cundill Value Fund," and went on to bag the 26% compound annual return (CAGR) mentioned earlier.

If that early track record wasn't enough, Cundill continued to outperform over the next ten years, as well. 20 years after taking control of the struggling fund, Peter Cundill managed to earn investors a 19% CAGR net of fees. Put into context, this is the same return that Charlie Munger's Munger-Wheeler partnership returned as documented by Buffett' Superinvestors of Graham-and-Doddsville. Cundill's record was achieved with much more inflation adjusted capital under management.

What's even more startling is that Cundill's first down year only came in 1990, a 15 year win streak. From 1974 to 2006, when Mackenzie purchased the company, Cundill's assets under management surged from $8 Million to nearly $20 Billion.

Just like Walter Schloss in his early days, Cundill started out and earned his highest returns using Graham's famous net net stock strategy. Later, as his size prevented him from buying net nets, he shifted to Low Price to Book stocks, Magic 6s, and firms Martin Whitman would call "safe and cheap." But, what's really interesting about his investment strategy is how he leveraged the great returns associated with high quality net net stocks to earn his best returns when he was starting out. For a complete guide to how he was able to earn such outstanding returns, click here.

Christopher's book documents Cundill's investment criteria. He also walks investors through Cundill's early investments to show how he applied his checklist and various decisions that Peter Cundill made when selecting his stocks.

Much of these insights are taken straight from Peter Cundill's personal diary. Fortunately for investors, Cundill took extensive notes and documented his decisions, if for no other reason than to achieve mental clarity. Apparently, there are volumes of notebooks closely guarded by Cundill's closest friends and followers, and Christopher used these books extensively to draft his text. This makes There's Always Something to Do — The Peter Cundill Investment Approach an intimate account based on personal insights and accounts that are rarely seen in popular books.

There's Always Something to Do — The Peter Cundill Approach

Given a few good reviews of this book, and the fact that Cundill is one of the great net net stock investors of modern times, I had more than enough incentive to actually make a purchase. Initially I had hoped for a thorough account of Cundill's investment strategy, but found a much more wholistic look at the man.

Christopher goes deep into Cundill's life. Certainly there was a lot to tell. Peter was intensely driven — pulling up stakes and moving to entirely different countries when the itch arose, diving head first into a passionate long distance running love affair at a late age, and moving through the lives of others like a whirlwind. Christopher also walks readers through Cundill's wild side, one that often saw him drink far more martini's than any man has a right to drink. All of this was on top of the hours he spent pouring over balance sheets, or dissecting businesses to uncover their last drop of value.

Investors looking for a how-to book may find Christopher's work thin on content. Given Peter Cundill's investing prowess, and the extensive volumes of journals he wrote throughout his career, significant opportunity existed for a well written, practical, investment handbook. The author could have really dissected Cundill's investment philosophy and technique, highlighting critical processes and diving full force into some of the ideas and techniques that made him such a great investor. It could have been a solid account of Peter's thoughts on investing, the way he took apart a company during research, the critical little pieces of information used to gain insight into the investment worthiness of a firm, or detailed examples of how he applied his process to particular corporations. Certainly there would have been enough material.

Instead, Christopher straddles a middle ground between biographical tribute and investment guide, recording much of Cundill's exceptional life with investment insights intermixed. As such, those hungry for an investment text may be disappointed; but those curious about the mind and life of a gifted investor will enjoy There's Always Something To Do —The Peter Cundill Investment Approach.

Is There's Always Something To Do — The Peter Cundill Investment Approach worth reading?

When it comes to learning how to be a good deep value investor there are plenty of great resources. Investors should consider picking up Security Analysis by Benjamin Graham and David Dodd, as well as The Snowball: Warren Buffett and the Business of Life, a masterful biography by Alice Schroeder. Both are great books in their own way but represent different sort of investment books. Christopher Risso-Gill's book is much closer to Snowball, with its bits of insights sprinkled throughout, rather than Graham's weighty text.

Whether you should read the book depends a lot on where you are in your own learning process. If you've internalized much of Security Analysis and thoroughly enjoyed Snowball, then There's Always Something To Do should be on your bookshelf. It provides brief bits of inspiration that will ultimately help take your deep value investing to the next level. Along the way, you'll have the pleasure of learning how great life can be if you're prepared to follow your passion.

Get free net net stock picks sent straight to your inbox each month. No obligation, no risk, no spam, just net net stock ideas you can use. Enter your email address in the box below right now.