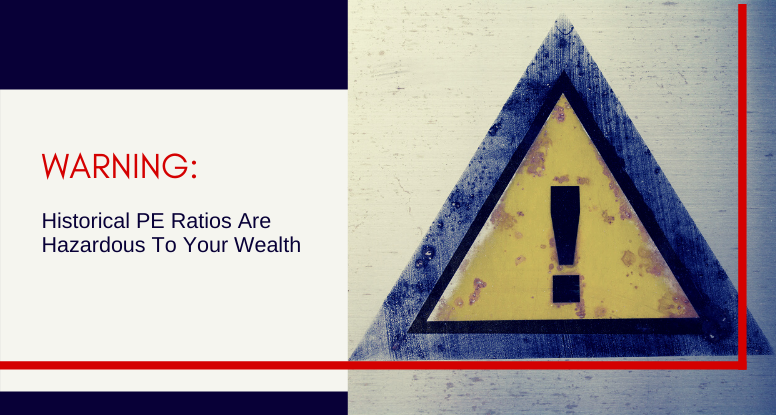 Warning: Historical PE Ratios Are Hazardous To Your Wealth

This article on PE Ratios was written by Isaac Aydelman. Isaac is a student of economics and a former soldier. He was drawn to net net investing for their historical returns and how the strategy paired well with his personality. He manages his own personal account and is always looking for new opportunities. Net net investing was Ben Graham's strategy of choice and even helped Warren Buffett earn the best returns of his career. Get our Essential Net Net Stocks Guide to understand this strategy in detail. Click Here. Article image (Creative Commons) by lamoix, edited by Net Net Hunter.

When I started value investing I had always heard of historical PE ratios. In fact, it seemed like a rite of passage as a deep value investor to screen for companies with the lowest PE ratio, in the hope that I would find great buys to profit from.

I quickly found out however, that PE Ratios might not be all that useful in finding high-quality undervalued stocks. They may instead act as more of a trap for investors who may buy blindly when they search for companies with the lowest PE ratios.

What Are Historical PE Ratios?

On every news source and investment resource, I saw the term PE ratio thrown around. It's only after I started researching companies myself that I realised, PE ratio is a blanket term. PE stands for price to earnings. The standard PE formula is:

The PE ratio may be the most used ratio in finance. It's a quick and dirty way to make an easy comparison between companies. It looks at what the stock price of the company is, and divides it by how much the company earned.

Earnings is the company’s bottom-line, its after-tax income. The formula then splits those earnings equally between all of the company’s outstanding shares.

When using a historical price to earnings ratio, you look at the history of the company’s earnings and compare it to where it stands today. This can mean looking at five years or as far back as 25 years.

When I looked at a company’s PE ratio, what made it cheap? This method looks at the historical average PE ratio. If PE ratio is low compared to its long term average, then surely it's a great time to buy, right? Well as it turns out, it's not that simple. While investing legends such as Peter Lynch espouse using the historical price to earnings ratios, there are some important pitfalls which I’ll get to in a minute.

Forward PE Ratios: Are They The Cure?

Looking through financial statements, I saw that companies themselves often give their own guidance for future earnings under the term forward earnings. While these certainly fix some of the issues with historical earnings, they come with their own problems.

All forward earnings are estimates and last I checked, no one has managed to predict the future. A lot happens to me over the course of a year, I could only imagine what can happen to a business.

Furthermore, the further out I estimated, the foggier the predictions became. I was forced to stick to short term forward PE ratios which have the same issue as using short term historical PE ratios for individual stocks.

On my journey to improve upon the typical PE ratio value investing strategy, I figured that if a low PE stock is good, then a negative PE stock must be better. Can a stock have a negative price to earnings ratio? It can’t have a negative price, so that means its earnings have turned negative and the company is losing money. Where was the value there?

Looking at stocks that historically trade at negative PE ratios, all I found were businesses that were constantly losing money or speculative industries such as mining and pharmaceuticals that were capital intensive. Not exactly American Express.

Why Do Value Investors Use PE Ratios?

As my search continued, all I found were flaws in the much-repeated mantra of PE ratios. I thought that I must be missing something. Keen to learn from people much smarter than me, I started researching famous investors that swore by the PE ratio method.

Dreman believed you could beat the market over the long term by investing in a basket of low PE stocks without screening for other factors. He commissioned a study to back this up and found that the portfolio returned an average of 19% over 27 years.

But as I dug deeper I found out that Dreman was being modest in his market beating strategy. He looked at other valuation ratios for a good buy, including a strong balance sheet, as many favourable ratios as possible and a sustainable dividend yield.

Neff was another famous contrarian value investor, managing Vanguard’s Windsor fund who also espoused the benefits of buying low PE ratio stocks. Again, I found that there was more than meets the eye.

Neff didn’t only look at a company's PE ratio, he deeply researched how effective management was, giving weight to other metrics such as Return on Equity. Neff, unlike other value investors, also tried to predict the business cycle and a business’s future earnings.

One of the most famed investors out there was always on the lookout internationally for stock markets that had reached what he called ‘the point of maximum pessimism’. He often compared the averaged PE ratios of countries’ stock markets and was naturally drawn to where the ratio was lowest.

This certainly made him a PE investor, however once he honed in on a specific country, he was not above buying a higher PE stock if the growth prospects appeared more attractive. In other words, John Templeton may have used the PE ratio, but he didn’t rely on it.

Despite my frustrations with the PE ratio I understood why it was so popular. It’s simple to calculate and the ratios are often posted on large investing websites for free.

The logic behind it is also simple: What is the price of a stock relative to how much profit its earning. It can serve as a great starting point and is able to give a rough idea of price to value in some cases.

The PE ratio has even taken on new life outside of value investing with innovations such as the Schiller PE ratio, which is used to try to assess the relative over or undervaluation of a stock market index.

One of the most glaring issues I found with historical PE ratios was that if I were to only look at historical PE ratios there would be no way I could factor in why the company has low price or profits. If it's a question of unlocking value or due to high R&D, I’d have no idea from a low PE ratio.

Additionally, there is no way to account for a situation where a business enters a promising new business that may be a huge boost. Likewise, you can’t account for qualitative changes such as new management.

High Historical PE Ratios Are Not Always Due To Overvaluation

I noticed that with non-cyclical companies, over the long term, earnings go up. My long term historical pe ratios could never give me an accurate picture of how the earnings relate to today. If I used a small sample I would run the risk of calculating historical PE ratios that are skewed due to a few extraordinary years.

What if the company had just announced a strategic deal and its priced jump, but its earnings had not yet reflected it? If I never looked at high PE ratio stocks, I’d be skipping over a potential winner.

Which leads into my conclusion: Just like the legendary PE investors, there are other measures to use and investors better use them.

With cyclical businesses, the PE ratios would vary considerably. With these companies I found that there was a reason for their low PE ratios and it wasn’t good. On top of that, businesses with special one time earnings would further distort the picture, especially if this occurred over a number of years. A great example I found of this was the period during and after WW2.

The central issue with PE ratios I found was that earnings are too volatile, the legends mentioned above seemed to agree. I realised that I needed to look at more robust sources of value that fluctuate less.

It seemed my journey was coming to a close as I found it: Asset value. Asset value is easier to track and project. Valuing companies based on their asset value allowed me to buy depressed companies with a high margin of safety.

Then there is my favourite: Businesses selling below their net current asset value. This strategy, created by Benjamin Graham not only showed huge returns over long periods of time, it was a strategy that just made sense. What's simpler than buying a $1.00 for $0.50?