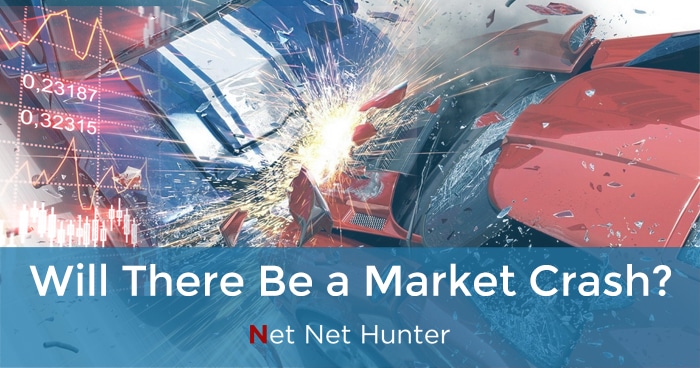 Will There Be a Market Crash?

The following article is a guest contribution by deep value investor and Net Net Hunter member, Tobias Meier. Tobias is a lawyer based in Switzerland and spends his free time thinking about deep value situations and uncovering high quality net net stock candidates.

Dear "Executive Summary Reader," for a short and unproductive answer, please scroll to the bottom.

"Don’t worry about a market crash, you can’t time the market anyway, just stay fully invested in stocks and hang on, over the long run, you are bound to come out ahead..."

Really? Is that statement universally true?

To get good answers, you have to ask the right questions. When thinking about investing in the stock market, most people - being brainwashed by the media - ask:

That’s not a good question.

What you should ask instead is "What should I do?". Here, I am emphasizing the word "I" in the last sentence. Charlie Munger likes to quote the mathematician Jacobi and suggest: “Invert, always invert!"

So, first of all, what shouldn’t you do?

If we can define a scenario, where an all-in index investor doesn’t fare well and tweaks the strategy to still get decent results, we might come to valuable conclusions. We can also start to rewire our thinking from "What will happen?" to "What should I do?". Let me explain.

Imagine a 65-year old Japanese man in 1989: Let’s call him Mr. Sato. After a lifetime of hard and sincere work, Mr. Sato commences his well-deserved retirement, receives his pension money, the equivalent of $500 000 USD (please note that I am not familiar with the details of the Japanese pension system – that’s not the point of the article) on the 31st of December 1989 and invests it all in the Japanese stock market, the Nikkei 225. That’s what his friends advised, and they have made a lot of money. After all, Japan is the new economic superpower, what could possibly go wrong?

Little does he know at that point, that at the beginning of 1990, the Japanese asset bubble, one of the biggest in recorded history, will start to deflate and destroy substantial parts of his wealth.

What could he have done better ?

Yielding to his "home bias" and putting all of his savings into the Japanese market, Mr. Sato takes on unnecessary single country risk. By diversifying internationally, on the other hand, he wouldn’t have been at the mercy of one single country. Despite its recent success, any country can change for the worse, every trend can break. Nothing lasts forever.

Let’s assume that Mr. Sato invests in a market-weighted ETF (never mind that it’s 1989) and is thereby tracking the Japanese Nikkei and owning companies with PEs of nearly 70x on average. No wonder that starting at such a lofty level, the Japanese stock market LOST more than 60 % from 1990 to 2011.

By investing in the cheapest quintile of stocks in terms of PE and rebalancing monthly, one would have still made around 16% per year (according to a study by Value Partners Center for Investing) in the same time period.

In various scientific studies, value strategies – especially net net strategies - have been shown to have worked particularly well in many "lost" decades, such as the inflationary decade of the 1970s in the US, the deflationary 1990s in Japan, or the first decade of the 2000s, a go-nowhere decade for stocks that saw two large stock market crashes.

It's important to recognize the benefits and limitations of value investing, though. In the event of a market crash, characterized by a rapid decline in stock prices where everything seems to get sold regardless of fundamentals, value stocks have not always held up better than the average stocks. For example, in 2008/2009 it was in the subsequent recovery after a crash that value started to outperform handsomely again. Of course, the actual investor is still on board at that point.

Could some quality indicators reduce drawdowns without lowering long-term returns? That’s a topic for some other time…

If, for whatever reason, you don’t want or can’t invest in anything but the big domestic names or in a broad index, you could at least spread your bets by allocating a part of your money to asset classes with low or moderate average correlation to the stock market, such as gold, bonds, real estate or private equity, defining a target percentage for every asset class and rebalancing once a year. Many strategies like Marc Faber's - who suggested 25% allocation to stocks, bonds, gold and real estate - have been shown to deliver (almost) equity-like returns with drastically reduced volatility.

By going all-in at once, especially as a retiree and at the lofty valuation levels of 1989 in Japan, Mr. Sato fails to take advantage of another possibility to diversify – the diversification of entry points. By committing to a dollar cost averaging approach, with means investing fixed amounts at regular intervals, rather than investing all at once, one could have forgone the possibility of entering the market exactly at the wrong time.

Dollar cost averaging seems to be a bit of a controversial topic in the financial community, the main counter-argument against it being that in most scenarios an investor will have lower returns by dollar-cost averaging because he has to much cash on the sidelines.

When an investor goes all-in though, his entry point can be important. Just because you can’t time the market, doesn’t mean that it won’t make a difference. When the all-in entry point is right before a drastic decline like in Japan at the end of 1989, he might still be worse off after many years than a dollar cost averager. If an investor feels paralyzed by the possibility of a crash, it might still be a viable option to be partially invested and/or moving into the market gradually, rather than contemplating forever back and forth between the two extremes, 100% in stocks or 100% in cash.

You might have noticed a common theme by now: managing and reducing risk, rather than guessing about the future. Benjamin Graham said, that successful investing was "about managing risk, not avoiding it".

You might say at this point, "But I want to be 100 % safe, I’ll keep everything in cash." Paper money, available in endless quantities, printing press running 24-7, backed by nothing but good faith - that kind of safe?

Risk in the specific context of this article means reducing the danger of big drawdowns in the event of a once-in- a-lifetime crash. In the case of our retiree, who wants to invest in Bubble Land, it makes sense to take that scenario into consideration. However, Mr. Satos risk isn’t your risk. The word risk can’t be taken out of context. Or can it ? To be continued…

And by the way, the answer to the title is : YES. As it has always been and always will be…

Make the most of your investing. Request free net net stock picks in the box below this article right now.