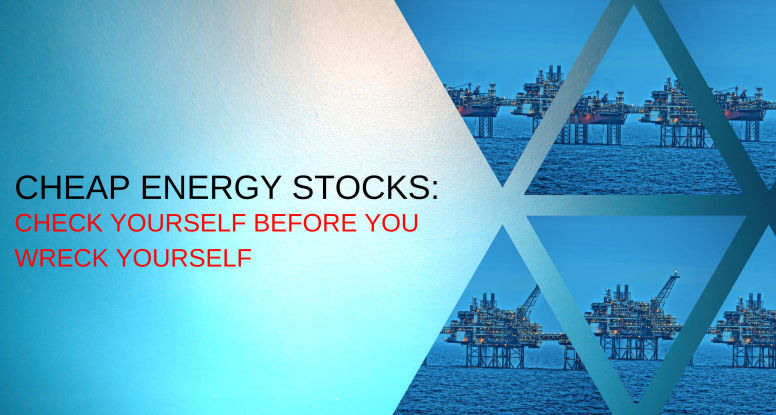 This article on cheap energy stocks was written by Luis Sánchez. Luis is a lawyer and investment manager based in Bogotá, Colombia, who is primarily focused on net net stocks. Net net investing was Ben Graham's strategy of choice and even helped Warren Buffett earn the best returns of his career. Get our Essential Net Net Stocks Guide to understand this strategy in detail. Click Here. Article image (Creative Commons) by  chumlee10, edited by Net Net Hunter.

As you may know, net nets are stocks selling for prices below liquidation value — i.e., the value of current assets less all liabilities.

Well, some of these cheap energy stocks even trade below net cash value, which is simply the value of cash, less all liabilities.

Take Bowleven PLC, an exploration company in the oil and gas industry listed in the UK. As of December 31st, 2018, the company had £296 million GBP in total assets, of which £70 million were cash and cash equivalents. Total liabilities were less than a million GBP — as of this date, you can buy the whole business on the stock market for only £33 million GBP.

This just seems like the ideal value investing — after all, you’re getting dollars for fifty cents, right?

Well, is not that simple. Because this companies burn their cash so fast, you may actually end up paying a dollar in exchange for less than fifty cents fifty cents.

In this article, we’ll walk you through the reasons for this conclusion in detail.

Just what, exactly, is an energy stock?

An energy stock is a company involved in the exploration, development, or production of commodities such as oil, gas, coal, uranium, and the like, which are used to produce energy.

That said, there’s a huge difference between exploration, development, and production energy firms.

Exploration firms scout the world trying to find these commodities. If found, the firm puts together projects to extract the resources. They don’t hold the commodities yet, but they could be sitting on prospective or proven reserves of the basic material.

Development firms are the next stage. Once a company has found the resource, wherever it happens to be, it has to determine if extracting the resource is profitable, so these firms develop an extraction project to sell it to a production firm or extract it themselves.

Exploration and early development companies are funded with cash from initial investors. That cash will be spent on exploration projects until it melts away and the companies ask investors or banks for more money.

The thing is, there’s only around a 1% chance they’ll actually find something after they drill a hole — at least, that’s the figure we got from an experienced mining engineer.

If they find the mineral, though, shareholders could cash in a tidy profit if the firm sells the claim to a developer or producer. The exploration company could also keep the claim and decide to go it alone in the development process, but someone has to fund that project — usually the same shareholders who had been waiting for their money back.

This is a recipe for destroying shareholder value over time. The odds are just not in your favor, and that explains why most of these companies trade below net cash.

Pharma stocks — i.e., firms that develop new drugs for patents — are very similar to exploration companies, and the market prices them accordingly.

Production firms already have the commodities and the infrastructure in place to extract them. They just have to sell the resources, hopefully at a profit.

But commodities prices fluctuate wildly over time, and that’s the biggest risk for production companies. If prices collapse below the cost of production, that firm is going out of business sooner or later, unless it can cut costs accordingly.

Some costs you can cut. Others, like financial debt, you can’t. Take Pacific Exploration and Production, a Canadian oil producer whose financial leverages proved deadly when oil prices halved in 2016.

The price of the resource is carried on the balance sheet of production companies as inventory. For net net investors, this means the net current asset value (NCAV) will fluctuate with the price of the specific commodity, adding complexity to the valuation process.

Net net investors could opt to value such firms on a net cash basis — just as with exploration companies. But these producers don’t carry as much cash as exploration firms, so the probability of finding a production company selling below net cash is very low.

Now, investors could actually try to find the central tendency of the value of the commodity in the long run, but then they’d be dealing with a macro variable, shifting their investing strategy away from net net investing, and more into cyclical stock investing.

Cyclical stocks are shares of companies that operate in a cyclical industry.

To a certain degree, all industries are “cyclical” because in severe economic downturns such as recessions or depressions, everybody suffers. While some industries are more affected than others, other industries just have their own internal cycle.

A cyclical industry has years of extraordinary profits followed by deep downturns. Buying cyclicals is tricky, because they look cheap from a price-to-earnings point of view during peaks, so amateur investors usually buy them just to see the price fall months later when the cycle turns and earnings tank.

Cyclicals are interesting, though, if their price falls below liquidation value. In that case, pessimism is at its highest, and even small improvements in profitability — or just a little reverse of the cycle — can make for extraordinary returns.

Take Richfield International, a stock that appeared on our Shortlist in 2015. This company was listed in Australia and operated in shipping, an industry that’s been suffering for almost a decade now. It was a tiny nano-cap and a penny stock, selling for $0.085 AUD per share, while net current asset value (NCAV) per share was at $0.17 AUD.

Some Net Net Hunter members dug deeper and found out it had zero debt, net cash, and adequate past earnings, so they bought.

The returns were as follows:

Want another example? Check out Enteq Upstream PLC, a technology provider for oil and gas drilling companies. On August 15, 2015, this stock appeared on the Net Net Hunter Shortlist, and we found out it traded at a 55% discount to NCAV, with zero debt. It didn’t have adequate past earnings, and with the oil price sinking, its prospects were dire. But even small improvements in the industry can shoot up the price of tiny net nets, and when oil prices recovered some of their previous losses over the following year, Enteq Upstream tripled in price.

This goes to show that, as long they’re in good shape to survive a crisis, cyclical net nets can earn investors outstanding returns. Energy production companies may fall in this category, but there are exceptions.

Energy resources are spread unevenly around the world, and sometimes resource companies operate in what we call “sketchy geographies.”

A sketchy geography is just a place where there isn’t the rule of law, and governments can seize your company out of your hands by force, without providing you any compensation. Think most communist countries and totalitarian regimes.

Unclear and ever-changing regulations for resource production are also a common characteristic of sketchy geographies.

As you can see, cheap energy stocks operating in sketchy geographies are cheap for a reason.

Benjamin Graham once said that a stock that’s selling below liquidation value, is at no risk of dissipating its assets, and has a history of steady past earnings was probably a bargain.

Cheap energy stocks are not bargains, and net net investors would be better off avoiding them altogether.

At Net Net Hunter, we look for high-quality net nets instead. That’s why we discard resource exploration firms. Highly leveraged, or shell, companies are also excluded from our Shortlist for similar reasons — they just tend to destroy value over time.

This article about cheap energy stocks is based on a discussion that’s posted on the Net Net Hunter Inner Circle Forum, where members of our community discuss investment strategies, books, stocks, and much more!

If you want to join these discussions, share your opinion and learn from seasoned and amateur value investors, join us now!

CHEAP STOCK: THE MOST RECENT ARTICLES