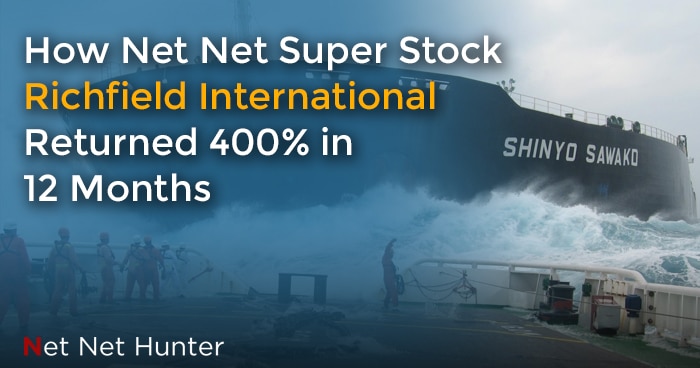 How Richfield International Soared 400% in 1 Year

This guest post is by Net Net Hunter member Tyen Redmond (a.k.a. "The Hairy Contrarian"). The opinions here are his and may or may not reflect the opinion of anybody else at Net Net Hunter.

When Richfield International first came on my radar, I was unaware of the enormous success that was about to follow.

I had recently come across the Net Net Hunter website and had signed up for the email newsletter. Richfield just happened to be the first net net stock recommendation I received. It fit my criteria, and even better, it traded on the Australian Stock Exchange in my home country.

I remember thinking to myself: “If this is the free monthly stock pick, imagine the wealth of information and recommendation that would be available to Net Net Hunter members.” From that point I was determined to become a member to reap the rewards.

So why was Richfield so attractive?

The problems were large and obvious. Richfield was a port service and shipping company and had significant operations which were being impacted by two forces outside their control: fuel costs and market saturation. High oil prices made it harder for shipping firms like Richfield to break even. Combined with fierce industry competition, there was a race to the bottom in the industry. This had the effect of temporarily impacting Richfield’s bottom line.

The company was based in Singapore. This was unusual but not necessarily a negative as Singapore was also a well regarded financial market and had strong corporate regulations. Further, the company had also had operations in both Australia and Vanuatu. This showed that the company had a broad geographical footprint despite it’s small size.

I also discovered that the company’s subsidiary operations of Speeda Shipping Company, which provided container and charter services, had been put into hiatus due to numerous economic factors including poor market conditions for containerized shipping which were contributed by oil prices, the global economic climate and over saturation of the market. However, by late 2014, Richfield was projecting improvements in these areas over the coming months.

But, the company’s books also had cash-flow in numerous different currencies, which meant that exchange rates had been having a huge impact on revenue and profit.

This unusual structure and geographic set-up undoubtedly contributed to the company being undervalued. Also, given Richfield’s size, it was practically ignored by the broader investment community. In May 2015, its Market Cap was just over AU$5.3 million – what is often called a nano-cap company. You would not have found any professional analyses on it, either – only amateur value-investors with tiny portfolios taking a peek. To top it off, Richfield’s small size meant it was hard to buy shares, as the trading volume was low. Persistence and patience, on the other hand, pay off.

By late May 2015, I had the time to undertake a thorough analysis of the company. I crunched the numbers and read through five years of annual reports. By the end of this process I was salivating. Had I actually stumbled upon a great net-net buying opportunity on my first attempt? I tried to not get too excited, as all good investors must manage their emotions. I became more critical of my analysis as a result. I recall thinking to myself: “Am I missing something here?”

Turns out I wasn’t.

I calculated NCAV per share at AU$0.17. At the time, the company was trading at about AU$0.085 per share. A 50% discount! Even better, Richfield had a very low Debt-to-Equity ratio – 0% to be exact. This was a strong plus since net nets are firms facing major business problems and debt can push a distressed firm into bankruptcy.

Richfield had a history of decent earnings both on an Earnings Per Share and Buffett’s “Owner Earnings” basis. More good signs. The company had also been trading close to NCAV per share price a little over 12 months earlier. This suggested the recent drop might be a bit of a glitch and that there was no sign that the firm was a perennial net net.

Though the short-term outlook looked negative, Richfield appeared confident in its long term direction and ability to absorb the impact of the short-term market disruptions. Management didn’t panic and start selling shares to finance operations. Instead, they took some very smart strategic decisions, such as putting the relatively young Speeda Shipping Co on hold, and waited out the storm (inadvertent shipping pun intended).

The most recent Annual Report available was from 2014. This showed that the company had AU$11.8 million in cash on the books. It also showed that Richfield only had AU$2 million in total liabilities. That meant that, theoretically, you could purchase the whole company for AU$5.3 Million and have AU$10 Million left after paying off all liabilities. In other words, Richfield was priced under Net Cash. Astounding.

Convinced that this was a prime opportunity, I bought shares. By November 2015, roughly 6 months later, Richfield was back trading at 100% of NCAV, AU$0.17 per share, an 89% return before brokerage fees and tax!

My policy was to sell when shares returned to 100% NCAV. So I sold out and took the handsome gain.

But what would have happened if I held? Applying the Peter Cundill approach – selling half your holding when it reaches 100% NCAV and keeping the rest – would have produced an even more spectacular return.

Richfield’s price continued to increase after November 2015. By May 2016 it was up to AU$0.245 per share. Then in the second half of the year, shareholders approved an on market takeover attempt by Mercantile OFM for AU$0.34 per share!

This is another net-net example of the value of cash on the books. Richfield could ride out the short-term drama caused by high oil prices and market saturation, waiting for business conditions to improve.

Richfield is a great example of net-net investing 101. A tiny company that got no attention from the investment community facing a difficult situation that then returned 400% for intelligent investors. Benjamin Graham would have jumped at an opportunity like this.

Richfield wasn’t a ‘cigar butt with a final puff left’ - as Warren Buffett has described net-net’s but a fantastic opportunity for an excellent return when conditions improved. This excellent return would be irrespective of whether you sold out in November 2015 or held out until the take-over took place.