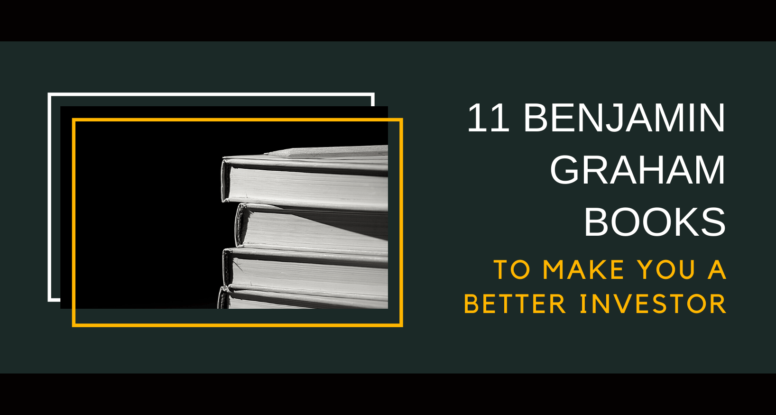 11 Benjamin Graham Books to Make You a Better Investor

This article on Benjamin Graham books was written by Isaac Aydelman. Isaac is a student of economics and a former soldier. He was drawn to net net investing for their historical returns and how the strategy paired well with his personality. He manages his own personal account and is always looking for new opportunities. He uses Net Net Hunter's high performance net net checklist to identify his stocks. Download our net checklist right now for free. Click Here. Article image (Creative Commons) by Christopher, edited by Net Net Hunter.

Who is Benjamin Graham?

Benjamin Graham, widely credited as the father of value investing, was one of the most influential investors of the 20th century, and famously mentor to the legendary Warren Buffett.

Being born into poverty would impact Graham’s focus on looking for bargains. Graham turned this focus into a full blown investment philosophy.

While running his partnership, Graham wrote his first book, Security Analysis, which revolutionised investing. Graham championed viewing shares as part ownership of a business, and clearly defined investing apart from speculating. Graham would later publish The Intelligent Investor, a condensed version of Securities Analysis meant to help the everyman investor.

Graham’s contributions to the investing world are in a league of his own, he created the ideas of intrinsic value, margin of safety and diversification when these terms were completely ignored. He also went on to mentor a generation of legendary value investors nicknamed the ‘Superinvestors of Graham and Doddsville,’ most famous among them Warren Buffett. Graham’s influence can still be seen in today’s crop of top investors such as Bill Ackman and Seth Klarman.

Anyone serious about reading Benjamin Graham books needs to read Security Analysis co-authored with David Dodd, Graham’s first book. With the serious investor in mind, Graham defined value investing and all the concepts within it. The book was written during The Great Depression, which strongly influenced Graham’s views and strategies. He stated:

“In the field of common stocks, the necessity of taking price into account is more compelling, because the danger of paying the wrong price is almost as great as that of buying the wrong issue."

This kind of advice seems obvious to value investors today, but in 1934, this was revolutionary. Benjamin Graham’s buying focus wasn’t simply intrinsic value, but buying at a discount to it - which he referred to as a margin of safety.

Of all Benjamin Graham books, The Intelligent Investor is Graham’s most famous. Of course, glowing reviews from Warren Buffett and a host of famous investors only helped the book become a mainstay in today’s investor’s bookshelves.

The book became so popular because unlike Security Analysis, which was dense, heavy and aimed at professionals, The Intelligent Investor was aimed squarely at the average investor. Graham condensed his main principles into easily digestible and well written prose.

He also gave investors all the tools they needed to build a quality stock portfolio for long term appreciation. He even split the strategies into two types of investors: Those willing to expend more time and effort, and those wanting to be more passive in their approach. The book also laid down the foundations of value investing for generations to come.

3. The Interpretation of Financial Statements

While lesser known, it is no surprise that the man who emphasised careful study of a company’s finances also wrote the book on how to do so. The Interpretation of Financial Statements provides investors with a crash course in accounting, focusing on the areas most of interest to investors, breaking down financial reports and ratios.

Throughout the book, Graham refers back to the concepts he spoke about in his previous books, and how to connect them with a firm’s financial statement. Graham focuses on looking at metrics that show potential downside risk, such as working capital ratio and quick ratios.

Graham’s, Currency Market is a relatively unknown book that focused on one of Graham’s deep passions: Economics.

The book provides a brief overview of money’s historical relationship to gold and silver, then lays out a theory of how monetary status and pure commodity value can benefit each other and the economy at large.

Ben Graham was a respected expert on currency values, so readers  get a window into Graham’s thoughts on monetary and fiscal policy, rather than investing.

Another obscure book on economics, Storage and Stability, dives into supply, demand, production, and consumption. Graham presents the case that commodity storage can provide stability for the national economy since storage can prevent periodic short-term price disturbances.

Not all Benjamin Graham books on investing were written by the man himself. Unsurprisingly, the man who inspired Buffett inspired others to write on and expand his principles.

Along with practically birthing the idea of value investing, Benjamin Graham also created one of the most wildly successful investment strategies available today - net net investing.

Net nets were Graham’s bread and butter strategy while running his investment fund. While he never published a single guide on finding and valuing net nets, he did leave small bits of scattered writings about the strategy. Benjamin Graham’s Net Nets fills that gap while also discussing academic studies plus Buffett and Cundill’s approach to net net investing.

Half biography, half overview of Benjamin Graham’s thoughts and principles, Janet Lowe aimed to compile all of the Dean of Wall Street’s writings into one Graham book. Readers will be able to glean additional colour on Ben Graham’s ideas and their applications to successful value investing.

This Benjamin Graham book covers diversification, dividends and shareholder rights. Additionally, readers will learn more about the man himself and his personal life, an area Graham famously ignored in his own books.

For a more academic dive into Graham’s principles and theories, Janet Lowe compiled all the writings outside of the famous Benjamin Graham books into one text. Many of these writings are from his earlier days or have never been published, allowing readers to get a rare peek into the mind of an investing genius. As many of these writings were Graham’s own private thoughts to himself, readers will also be introduced to the man’s own philosophy when it came to life, investing and economic policy.

4. Benjamin Graham: The Memoirs of the Dean of Wall Street

Rather than a Graham book on investing, this book serves as the true memoirs of Benjamin Graham, for a portrait of the man himself. It acts as a biography and focuses on Graham’s personal life outside of investing -- a treat for any hardcore Graham fan who wants to learn what made the man tick.

Graham made the importance of  interpreting financial statements clear when investing. He believed investors needed to understand company accounts and approach them in a business-like manner.

One of the self-styled modern Graham books aims to update those classic views and principles with modern financial accounting, helping readers approach financial statements when investing.

Whitmen wrote a modern Benjamin Graham book with his work, Modern Security Analysis. The book brings Graham’s principles into the modern era, which is a different place from Ben Graham’s first books.

Paying attention to Graham’s ideas is hugely valuable but a few principles really stand out and can be applied to any investment.

First, buy with a margin of safety. Investors should only buy a stock when it is trading at a discount to its intrinsic value, giving the investor downside protection.

Second, take advantage of ‘Mr. Market’. Graham would have disagreed with today’s conventional wisdom that markets are efficient and all prices in the market are fair. Graham believed that as long as humans participated in markets, prices would be victims to the human traits of euphoria and pessimism.

The smart investor can always take advantage of this, buying stocks at a discount due to pessimism to resell at higher prices later during a period of euphoria.

Finally, Graham’s strategies were naturally conservative as he believed that if you take care of your downside, the upside will take care of itself.

Benjamin Graham may have been the single biggest contributor to investment theory. While many have come after with important contributions, many of those contributions would have been impossible without Graham’s insights first.

We should all be thankful that such a genius was also so focused on sharing his ideas with as many people as possible, and we can all gain something from reading Benjamin Graham books.