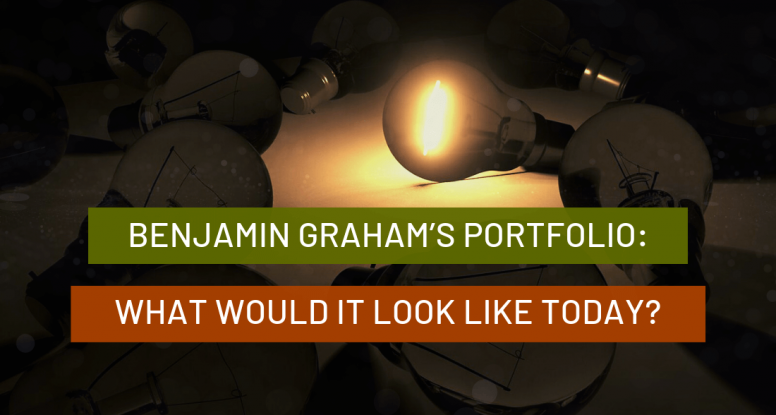 Benjamin Graham’s Portfolio: What Would It Look Like Today?

Would he be fully invested or not? Would he be in stocks or bonds? Which stocks?

Of course, we can’t be sure about what Benjamin Graham’s portfolio would look like today, but I think we can get a very good idea by looking at what he did during his years at Graham-Newman and his writings.

Let’s look at the evidence.

Graham ran Graham-Newman — his investment vehicle — together with Jerry Newman from 1926 until 1957.

That’s three decades of portfolio management experience, including during the worst stock market crash and economic and financial crisis the modern world has ever experienced.

Graham-Newman didn’t merely survive the crisis — it thrived throughout the entire period, earning Benjamin Graham the reputation of “The Dean of Wall Street."

That’s reason enough to listen to what Graham had to say about investing in the stock market.

He bought a basket of net nets and patiently waited for them to reach NCAV, then sold.

Keep in mind that Graham was a pioneer. He was navigating unexplored lands here.

So, he kept a very detailed record of his own portfolio performance to learn from his own mistakes. He tracked the results of each of his strategies independently and compared them.

What did he find?

His unquestionable conclusion was that the group of net nets far outperformed not only the market rate, but all his other investing strategies.

A group of stocks bought at prices below NCAV earned him a compounded annual growth rate (CAGR) of around 20%!

What did he do then?

Well, he did what any rational investor in his place would’ve done. He focused exclusively on net nets from then on.

Walter Schloss said that when Graham found out he could make money with a basket of stocks at less than two-thirds of their NCAV, “he kind of lost interest.”

About that, Graham said:

“At this point let me consider briefly an approach with which we were closely identified when managing the Graham-Newman fund. This was the purchase of shares at less than their working capital value. That gave such good results for us over a forty-year period of decision making that we eventually renounced all other common-stock choices based on the regular common stock procedures, and concentrated on these ‘sub-asset stocks.’ ” [The Decade 1965-1974; Its Significance For Financial Analysts, Benjamin Graham, 1975.]

In his last interview, in 1976, he went as far as saying that he considered net nets “a foolproof method of systematic investment.”

This is strong evidence suggesting that Benjamin Graham’s portfolio would focus exclusively on net nets today.

How did Graham find these net nets?

Price was the first filter.

Warren Buffett and Schloss worked for him in the ’50s. They said they basically scoured the Moody’s manuals looking for stocks selling at two-thirds or less of NCAV.

After that, they filled a simple form — basically a checklist — in which they recorded the basic quantitative facts about each stock.

What did Graham look for?

On this subject, Graham explained:

“Common stocks that (1) are selling below their liquid-asset value, (2) are apparently in no danger of dissipating these assets, and (3) have formerly shown a large earning power on the market price, may be said truthfully to constitute a class of investment bargains.” [Security Analysis, Sixth Edition, by Benjamin Graham and David Dodd, The McGraw-Hill Companies, 2009, p.570.]

Graham looked for companies which could continue doing business “pretty much as before” — i.e., companies that were not obviously heading towards liquidation.

If the company was just burning cash at a fast pace or had always been losing money, and there was no indication that management could turn around the situation, Graham passed. In this case, even if the company looked cheap, it was not a bargain.

As I’ve said, Graham always insisted on the group outcome when investing in net nets — that’s what he meant by “class” in the previous quote.

In the field of statistics, a class is a group of homogeneous events whose behaviour can be predicted, even though the individual outcomes are uncertain.

Everyone knows there’s a 50% chance a tossed coin will land heads.

That’s called the law of large numbers. Only large samples of a given class of events actually behave like the class.

So, how does this relate to net nets?

As a class — the total population of net nets in a given market — Graham found that 30 out of 100 net nets remained stagnant or lost their value, while the other 70 rose to their NCAV. In the long run, the result was a 20% CAGR.

Ever heard someone say “heads, I win; tails, I don’t lose much”? That’s basically what a group of net nets represent — a bet in which the odds are in your favour as long as you toss the coin enough times.

If you put all your portfolio in only one net net, though, chances are you’ll end up losing your money. Buy a large number of net nets — i.e., toss the coin enough times — and your portfolio will behave like the population of net nets.

Graham knew this and, for that reason, at times he held as many as 100 net nets. In statistical jargon, he wanted the sample to be large enough to be representative of the population.

He just wanted his portfolio to mimic the results of net nets as a class.

Can you emulate Benjamin Graham’s portfolio of net nets today?

Net nets are basically extinct in the US stock market — technically speaking, there are just not enough net nets in the US to form a portfolio large enough to mimic the results of the class.

But there are enough net nets in the stock markets of First World countries today. These countries have a rule of law, adequate corporate governance standards, and protections to minority shareholders, just like the US — think Japan, Canada, the UK, Australia or Singapore.

Net Net Hunter has access to a database from which we extract stocks selling below NCAV around the world. This is called the Raw Screen.

Each month, we spend around 20 hours combing through the approximately 1,000 stocks on the Raw Screen by hand in order to come up with the best investable net net stocks to focus your research on.

The result is a monthly Shortlist we send to our members.

The stocks in the monthly Shortlist meet several criteria regarding “buyability” — liquidity of the stock, basically — and some “quality factors."

But we also developed the Core7 Scorecard based on Graham’s writings and a number of academic studies about net nets.

Just like Graham did, we look for companies that can continue doing business “pretty much as before."

That’s why — other than a low price to NCAV — some of our criteria include adequate past earnings record, low debt to equity ratio, and management who respects minority shareholders — we don’t like to see management living off the company without adding value, or constantly issuing shares to dilute shareholders.

Graham used to say that the investor’s worst enemy was likely to be himself. What did he mean by that?

Human emotions of fear and greed and a host of biases and mental shortcuts end up destroying the returns of otherwise perfectly sound investing strategies.

You’re probably not a full-time investor. You may have a job and a family to take care of.

You may realize how extraordinary these net net returns are, and you might want to start your net net portfolio right away. But your job gets in your way, urgent family matters surface, and you end up giving up your idea — even worse, you actually start your portfolio but give up as soon as the next market downturn begins.

To sidestep this problem, we developed a mechanical net net investing strategy which only requires you to buy a basket of 20 net nets once a year, rebalance after holding for one year, and trust the class probabilities that fueled Benjamin Graham’s portfolio to success — and can do the same for you.