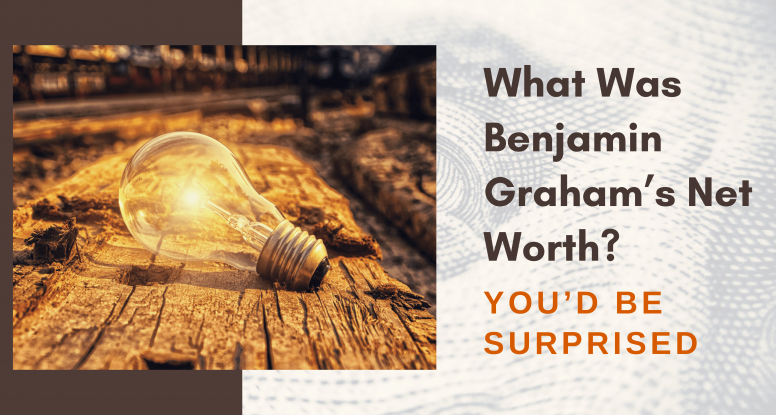 What Was Benjamin Graham’s Net Worth? You’d Be Surprised

This article on Benjamin Graham’s net worth was written by Luis Sánchez. Luis is a lawyer and investment manager based in Bogotá, Colombia, who is primarily focused on net net stocks. He uses Net Net Hunter’s VIP Newsletter to select stocks for his own portfolio. Get full access to our VIP Newsletter right now, for FREE. Click Here. Article image (Creative Commons) by Ky0n Cheng, edited by Net Net Hunter.

What was Benjamin Graham’s net worth?

Given his long investing career and his impressive track record, you’d think he was a billionaire by the time he passed away.

Indeed, on average, he earned around 15% a year for four decades. So, even if he started with a small sum, he should have built himself a considerable fortune by the end of his career.

However, he never focused on building wealth. He had other interests.

What Was Benjamin Graham’s Net Worth?

Graham was a very generous man.

His generosity is widely acknowledged by his relatives, friends, students, employees, Warren Buffett, and the numerous charities he donated to over the course of his life.

After all, as Buffett recalls, making money did not motivate Graham.

In the book The Einstein Of Money, the author estimates Graham only left his heirs about $3 million. He simply gave most of it away throughout his life.

Click to learn which value strategy earned Graham the highest returns of his career.

Again, considering he averaged earning around 15% a year throughout his four-decades-long career, this sum is ridiculous. But Graham's investment returns picked up significantly when he turned to this high performance strategy.

Benjamin Graham’s Net Worth: What Motivated Him?

So, if not building his net worth, what motivated Graham?

Graham was a very bright and curious man. After college, he was offered the opportunity to pursue a career as a professor — either in math or in literature.

Graham was fluent in at least seven languages, including ancient Greek and Latin. He taught himself Spanish so that he could translate Mario Benedetti’s The Truce into English.

Later on, he was also behind the design of the Bretton Woods agreement — and even wrote a Broadway play!

Clearly, what motivated him were intellectual challenges, not money.

The stock market just happened to be a field full of interesting problems for him to solve.

For instance, the stock market crash of 1929, and the Great Depression that followed, burned the life savings of millions of small investors. Graham believed they could have avoided that loss if they had followed a set of sound investing principles.

That’s why he was determined to find a solid, easy-to-implement investing strategy that small private investors could apply in the long run to achieve outstanding returns, while at the same time protecting their capital.

Benjamin Graham’s Net Worth: The Quest for a Simple Investing Strategy

In the ’30s, Graham found that one-third of US stocks were selling below net current asset value (NCAV) — i.e., the value of current assets less all liabilities.

As Graham put it, those businesses were worth more “dead than alive”.

Indeed, at such dirt cheap stock prices, an investor could buy those businesses, liquidate the next day, and still earn a profit.

Did all those businesses trading below liquidation value actually go bankrupt?

Not at all. Most of them were profitable businesses facing only temporary problems — yet, the market didn’t care; everybody wanted out.

Graham knew better. He put together a portfolio of around 30 net nets — as he called stocks selling at two-thirds or less of NCAV — and over the next three decades he earned around 20% per year on them.

Net nets present an asymmetric risk/reward scenario. They’re cheap for a reason, but they’re so cheap that, even if things go wrong, you can profit. They’re a classic “heads, I win; tails, I don’t lose much” situation.

In fact, only 3 out of 10 net nets actually fail — either going bankrupt or remaining stagnant for years. The rest usually rise to liquidation value — or beyond — over the course of the next 12-24 months.

Bottom line is, individually considered, net nets seem like risky bets; as a group, though, they’re actually quite safe and profitable.

As Graham put it:

“Common stocks that (1) are selling below their liquid-asset value, (2) are apparently in no danger of dissipating these assets, and (3) have formerly shown a large earning power on the market price, may be said truthfully to constitute a class of investment bargains.” [Security Analysis, Sixth Edition, by Benjamin Graham and David Dodd, The McGraw-Hill Companies, 2009, p.570.]

He soon realized this was the solid, easy-to-implement investing strategy for small private investors he’d been looking for.

However, Graham also found that, for small private investors, implementing the strategy was easier said than done. During downturns, they’d panic and quit, only to return when the tide went up again.

This was probably the last investing problem he faced: how to eliminate — or, at least, significantly reduce — the influence of emotions from the investing process.

Graham closed his investment fund in the mid-’50s. After that, he conducted research trying to find “groups of stocks that met some simple criterion for being undervalued — regardless of the industry and with very little attention to the individual company.”

The research consisted of a series of backtests of hypothetical portfolios of stocks selling at low multiples of NCAV or book value or earnings, which were rebalanced every one or two years.

Throughout the backtests, net nets were the most profitable group. The results were once again impressive — about 20-25% a year — but what really caught Graham’s attention was the fact that the rebalancing took place mechanically every one or two years, regardless of stock prices, and still, the results were good.

This led him to conclude that a mechanical investing strategy could actually help investors sidestep their biases and benefit from the long-term spectacular returns on tap for net nets.

Setting simple buying and selling rules, and sticking to them in the long run, was the way to go.

This was Graham’s ultimate investing strategy for small private investors.

Graham’s conclusions have been confirmed by ensuing academic research.

Henry R. Oppenheimer’s famous study Ben Graham’s Net Current Asset Values: A Performance Update was published in 1986. He compared the performance of a net net portfolio with a small firm index for a 12-year period starting in 1970 and found net nets beat the index with a compounded annual growth rate (CAGR) of around 30%.

Joel Greenblatt and Richard Pzena published How the Small Investor Can Beat the Market: By Buying Stocks That Are Selling Below Their Liquidation Value in The Journal of Portfolio Management in 1981. They found a group of high-quality net nets massively outperformed the market with a 29% CAGR.

James Montier, a mechanical value investor himself, published a paper on Japanese net nets, studying their performance from 1985 to 2007. During that period, the Japanese stock market returned a mediocre 5% CAGR, while Japanese net nets gave an impressive 20% CAGR.

Tweedy, Browne’s famous study What Has Worked On Investing confirmed the hypothesis once again. A group of net nets massively outperformed the indexes.

Most of these studies also concluded that a group of the cheapest net nets outperformed the more expensive ones.

What most of these studies have in common — aside from the fact that they focus on net nets —  is a simple mechanical buy-and-sell process for an investment strategy.

This all sounds great!

Sadly, nowadays there are only a handful of net nets in the US stock market. Finding a group of 30 decent net nets among them is almost impossible.

There are plenty in Japan, the UK, and Europe, though. Those are places with a rule of law, where shareholders’ rights are protected.

Why not hunt for bargains there?

At Net Net Hunter, we have access to a database from which we extract net nets from around the world. This is called the Raw Screen.

Each month, we comb through the approximately 1,000 stocks on the Raw Screen in order to come up with the best net net stocks available.

The result is a monthly Shortlist that our members receive.

That’s a great place to start your bargain hunt. But still, buying or selling these net nets when you have a “hunch” is dangerous.

That’s why we built upon Graham’s mechanical investing strategy and, using the solid academic research available, we developed the Ansan Simple Mechanical Strategy.

It consists of simple buying and selling rules. First, you buy the cheapest 20 net nets on the Shortlist. Next, you hold them for 12 months and then rebalance, year after year. This simple strategy lets you “buy and forget” for a year.

Twenty stocks is enough diversification for a net net portfolio, and the cheapest stocks outperform the more expensive ones, so why not stick to that?

The Ansan strategy helps you benefit from the statistical returns on offer for net nets as a group while keeping your investing process disciplined and safe in the long run — just like Graham envisioned.