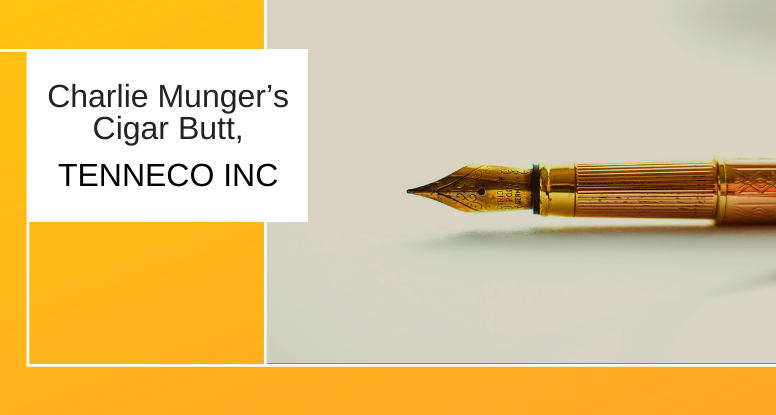 This article on Charlie Munger’s cigar butt was written by Thomas Niel. Thomas is a private investor, a financial blogger and an accountant in Washington DC. Net net investing was Ben Graham's strategy of choice and even helped Warren Buffett earn the best returns of his career. Get our Essential Net Net Stocks Guide to understand this strategy in detail. Click Here. Article image (Creative Commons) by Lasovsky, edited by Net Net Hunter.

In 2017, Daily Journal Corporation (DJCO), a publisher of legal newspapers controlled by Charlie Munger, held its annual shareholders' meeting. The event has become a de-facto “Munger meetup,” where value investors the world over come to pick Charlie’s brain.

In 50 years of reading Barron’s, it was the only investment he ever made from an idea originated in the magazine.

Within a few years, the stock went up to $15, at which point he sold. The bonds went back up to par value and were called in by the company in conjunction with a refinancing.

In all, Munger made $80 million, which he parlayed into an investment with fund manager Li Lu, who has since turned the tidy side investment into a cool ~$400 million.

Charlie Munger’s cigar butt investment in Tenneco is a strong case study in how to invest in turnaround situations.

What is a Cigar Butt Stock?

The term “Cigar butt stock” was coined by Warren Buffett to describe his early Graham-style investments in low-quality net-nets. Cigar butt stocks are typically poorly performing businesses on their last leg. The market, however, has oversold them to a point where they are trading at a fraction of their intrinsic value.

In cigar butt situations, there is the potential for a final catalyst (the last “puff”) to pop the stock closer to its intrinsic value, at which point you sell. These are not strong long-term investment ideas; cigar butts almost always fail to turn themselves around, and end up either going out of business, or languishing in value trap territory.

Ironically, it was Charlie Munger who talked Buffett out of focusing on these types of small scale net-net situations. Berkshire’s asset base was growing leaps and bounds above where these types of investments could move the needle.

In his Tenneco investment, Charlie Munger’s cigar butt was less a Graham-style net-net play and more a variation of his “exceptional business at a fair price” philosophy. You could call Munger’s Tenneco play “buying a fair business at a distressed price.” Unlike traditional cigar butt investing, Munger structured his investment more like a distressed debt investment, with a sliver of equity purchased to capture the potential upside if things did turn around one last time.

While generating consistent profits in the late ’90s, by the new millennium, Tenneco faced significant headwinds.

At first glance, Tenneco was not an obvious deep value play:

On the other hand, thanks to the high leverage, if things worked out there was a tremendous upside for the value of the equity. If Tenneco succeeded in restructuring operations and improving operating profits, the company’s share price would soar multifold. An environment slightly more favorable to Tenneco’s business would bring EBITDA back to the $300m-$400m level seen in the late 1990s.

Tenneco had set itself up to be Charlie Munger’s cigar butt, providing one last puff that could prove to be a multibagger.

After reading Barron’s piece, Munger’s due diligence on the stock lasted less than two hours. He had some background knowledge of the auto parts space and believed the brand equity Tenneco had through its portfolio of well-known brands provided a margin of safety in a cyclical, commodified industry.

Munger saw the company as a cigar butt, with a few puffs left of value. But with a high amount of debt on Tenneco’s balance sheet, the situation had more risks than your typical deep value investment.

The strongest deep value opportunities are typically extremely undervalued companies with relatively clean balance sheets. Tenneco’s valuation was fairly accurate given its recent performance in 2001-2002. The market had discounted substantial bankruptcy risk into the price of both Tenneco’s stock and its publicly traded debt.

Munger bought both the equity and bonds of Tenneco. The debt was trading at a sharp discount to par value. The 11.375 percent notes (maturing in 2009) were yielding 35% to maturity, implying he bought the bonds for around 40 cents on the dollar.

In a situation such as Tenneco in the early 2000s, this was a smart play. With the company barely able to service its debt, the odds favored a Chapter 11 filing, wiping out the value of the equity.

Taking a position in the debt was a conservative but aggressive way to take advantage of Tenneco's low valuation. Buying a piece of the equity was essentially “schmuck insurance” — an option that allowed Munger to avoid regrets down the road if the stock became a multibagger.

Buying the bonds gave Munger’s position some optionality. If Tenneco went bankrupt, his bonds would likely convert into equity. Even if bondholders took a haircut (were paid at a discount to the original value of the debt), with Munger paying less than par value for the bonds, a conversion of the debt to equity at even half of par value would be a premium to his basis cost.

A Chapter 11 filing would give the company greater freedom to eliminate obligations and restructure, allowing the company to return to profitability and valuation levels seen in prior years.

In a situation where Tenneco avoided default, investors would regain confidence in both the equity and debt issued by the company. The bonds would likely return to par value, and shares would rise on diminished bankruptcy risk.

Investor Carl Icahn made a similar play in the auto parts industry at this time. He bought a majority of Federal-Mogul’s distressed debt, which allowed him to gain control in bankruptcy court. By restructuring the company and taking advantage of increased demand for aftermarket parts, Federal-Mogul produced fantastic returns over a long holding period. Ironically, Tenneco was the company that gave Icahn his exit, acquiring Federal-Mogul earlier in 2018.

The Fruits of One Great Idea: Plenty of Puffs Were Left in Tenneco

Charlie Munger’s cigar butt proved to have many puffs remaining in the years following his investment.

Tenneco was able to restructure its operations, improving the company’s operating performance. With the risk of default mitigated, Wall Street regained confidence in the floundering auto parts maker.

With bankruptcy out of the picture, the bonds lost their heavy discount, not only returning to par value but trading at a slight premium. Tenneco called in the bonds, replacing the debt with proceeds from a refinancing at lower rates.

With Mr. Market rewarding Tenneco’s turnaround, it was time for Charlie Munger’s cigar butt to be put into the ashtray. While he missed out on even more appreciation in the years to follow, it is a whole lot easier to “take the money and run” as opposed to calling tops and bottoms.

Charlie Munger’s cigar butt produced close to $80 million in profits from both the equity and debt investments. Munger invested these proceeds with fund manager Li Lu, who eventually parlayed the windfall into ~$400 million.

According to Forbes, Munger’s net worth is ~$1.7 billion, meaning that a quarter of Munger’s fortune derives from this one idea!

While Munger’s play in Tenneco was a bit more complex than the investments that individual investors typically make (with the hybrid investment in Tenneco’s equity and debt), there are many takeaways from Charlie Munger’s cigar butt that can help you find opportunities that can produce big gains for your portfolio.

Great Ideas Come Rarely — But When They Arrive, Pounce on Them!

It took 50 years of reading Barron’s every week for Munger to find a great investment idea. Many beginners at investing lose money under the false belief there are always a plethora of “screaming buys,” when in reality the best ideas arrive periodically.

On the flip side, you can also miss out on big gains by failing to pounce when these great opportunities appear.

While it is important to avoid concentration risk in your portfolio, having a little patience and betting big when the odds are really in your favor is a better strategy than “flat-betting” the same amount of capital into both your strongest and weakest ideas.

We may not be able to “predict the unpredictable,” but there will be better bets that meet more of your criteria than others.

By placing asymmetrical bets accordingly as strong opportunities arise, you can compound several great ideas into a big portfolio over a long timeframe.

Tenneco was left for dead by Wall Street. The investing community believed that the company’s high leverage and weakened demand for auto parts would drive it into Chapter 11, the same fate as its rival Federal-Mogul. The stock had cratered to below $2/share. The bonds fell into vulture investor (distressed debt) territory.

Munger took a look at the financials and decided in less than two hours that Tenneco presented an asymmetrical wager. While there was a chance that negative cash flow and high debt levels would bankrupt the company, if the company stayed afloat, it would return back to intrinsic value, turning the stock into a multi-bagger once the company turned itself around.

It is important to note that not all bleak investing situations have a happy ending. I’m sure you are well aware of the investing world’s graveyard of stocks that bit the dust!

It is easy for both novice and experienced investors alike to overthink their way out of a profitable investing idea. As Charlie quipped during the DJCO meeting, it took him about two hours of research after reading the Barron’s piece to pull the trigger and buy Tenneco. He didn’t spend months touring Tenneco’s facilities. He didn’t call up auto parts stores inquiring about their future demand for Tenneco products. And he certainly didn’t use geospatial imaging to see how many pallets of Monroe shock absorbers were coming out of the factory.

Tenneco was cheap but distressed, with the street overselling the stock on expectations of bankruptcy. If the fears came to fruition, the stock would go to zero, and the bonds would likely face a haircut (payout below par value), not being paid off until years of Chapter 11 proceedings.

If Tenneco rode out the recession and returned to even a modicum of profitability, the stock would skyrocket, returning to its intrinsic value range.

Investors oversold on the bankruptcy risk, and that low valuation presented itself as an asymmetric wager.

Not all moribund companies are great value investment ideas, but once in a while, a screaming buy comes out of the woodwork.

A key thing to look for is optionality. The best asymmetrical wagers you can make are usually not binary. Like we’ve said before, it’s tough to “predict the unpredictable.” With multiple catalysts in place, an individual idea will have a greater chance of meeting and exceeding your expectations. Within a diversified portfolio of asymmetrical wagers, over the long run, you can come out on top and produce big returns!