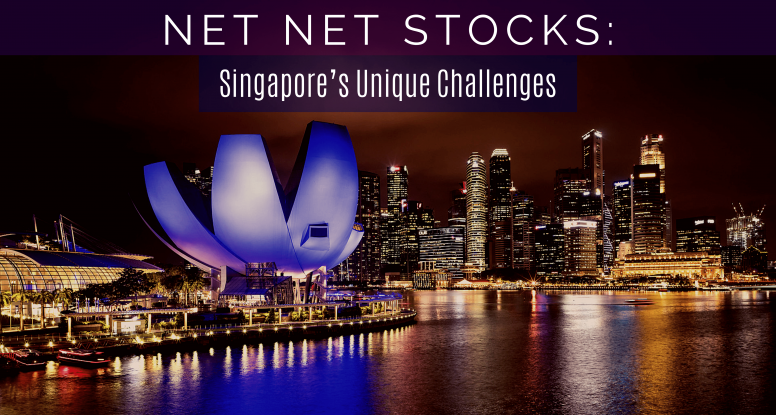 Are you currently investing in Singapore? Do you own any net net stocks in Singapore companies?

Looking at Net Net Hunter’s shortlist right now, net net stocks in Singapore companies cover 10% of the best net net stocks available in the world. With such a significant percentage of the finest picks in our net net stocks portfolio, we need to understand the Singapore market better, especially its challenges.

Singapore, an island nation well positioned as one of the best places to do business in the world, has become one of the world’s richest countries in a single generation. This is credited to the late Lee Kuan Yew, whom Charlie Munger has sung praises about during Berkshire Hathaway’s shareholders' meetings.

Singapore is Asia’s leading wealth management hub and the largest foreign exchange and active commodities trading centre. With estimated total assets of more than US$1.75 trillion under management, she is one of the few Asian countries with an “AAA” rating.

According to the Global Financial Centres Index (GFCI), Singapore is also ranked fourth amongst the world’s top financial centres. The beauty of Singapore’s financial market is in its low-tax regime, transparent legal structure, highly educated workforce, welcoming attitude to multinational corporations as well as a robust and efficient legal and judicial framework.

During the financial crisis in 2009, Singapore Exchange (SGX) listed companies raised over US$15 billion in follow-on funding from the capital markets – one of the highest secondary fund-raising efforts in Asia that year.

Nonetheless, the fortunes of SGX, along with the general interest of the public sentiment, has deteriorated and dampened in recent years.

The 2013 penny stock crash saga — dubbed the largest stock manipulation case in Singapore’s history — has greatly shaken investors’ confidence, as US$5.84 billion in value was wiped out from the stock market almost overnight. Last year, Keppel Corp, one of the largest and most trusted Singapore corporations, was slapped with huge penalties for paying bribes in Brazil.

Singapore’s market capitalization of companies with primary listings has fallen by US$71.23 billion (14%) in 2018 compared to 2014. The average daily turnover has also dropped by 50% since 2007.

In 2018, the money raised from the 15 SGX initial public offerings, excluding depositary receipts, fell to just US$519.11 million, while 19 companies departed — a net outflow of US$14.03 billion in market value.

On top of that, homegrown champions are bypassing SGX altogether. Led by a Singaporean Chief Executive Officer (CEO), gaming company Razer Inc. instead chose to list on the Hong Kong Stock Exchange (HKEX) in November 2017 despite being one of the few recent consumer-technology successes in Singapore.

HKEX is one of SGX’s greatest competitors, in large part due to its proximity to China and its Stock Connect, an authorized cross-boundary investment channel to mainland China exchanges. In comparison to Hong Kong, Singapore has a smaller pool of domestic companies with no hinterland to depend on.

There are two methods of delisting in the market when a company decides to remove themselves from active trading.

Mandatory or involuntary delisting occurs when a company fails to meet the listing requirements of profitability records and liquidity requirements set by the exchange.

Usually, when a company is forced to de-list, either it does not give any offer or it re-emerges without much dilution.

News like this is not unheard of in SGX. Presently, the number of companies joining the watch list for not meeting the minimum trading price (MTP) requirements — volume-weighted average price of less than SGD0.20 (~US$0.15) per share and an average daily market capitalization of less than US$29.22 million over the last six months — has grown to 22. This is following the bourse's latest half-yearly review of companies for failing to meet financial criteria.

Should the companies not meet the relevant SGX requirements to exit the watch list within the next 36 months, they may be delisted or have their shares suspended.

Voluntary delisting normally occurs if a company is acquired or goes private. Companies seeking to de-list often state lower costs and increased operational flexibility as key reasons. Generally, voluntary delisting means that the buyers think that the market pricing is lower than the intrinsic value.

In other cases, companies — especially those facing turnaround circumstances — feel that being private would allow it to have more breathing space and a longer time frame without needing to deal with the regulatory obligations of being listed. This can be done through methods such as takeover bids or a Scheme of Arrangement.

Usually, during a voluntary delisting, the existing shareholders are provided with an offer in cash or shares of another entity in exchange for their current shares. You could then opt to accept or decline by doing nothing until the acquirer obtains more than 90% of the shares that it and its related corporation did not own to trigger Section 215 of the Companies Act. This would then allow the offeror to exercise its right to compulsory acquisition.

Those that have been delisted in the past few years on SGX are companies that have a strong brand presence in Singapore, such as GLP (one of the world's largest warehouse owners), Osim International (Asia's largest maker of massage chairs) and SMRT, Singapore’s train operator.

CEOs who have taken their companies private, regardless if they are net net stocks in Singapore or not, seek out more liquid markets that can generate higher stock prices as they lament about the low valuations in SGX. Furniture company Man Wah Holdings Ltd. was taken private in September 2009. Within six months, it was relisted on the HKEX at about eight times its market value.

For volunteering delisting, it is no surprise that many a time when these companies announce their delisting plans, irrespective if they are net net stocks in Singapore, the exit offers are closed at a price way below the fair value. Minority shareholders ought to press these companies for further explanation.

With the controlling shareholders, who are mostly part of management, owning almost 70% of the company (90% for a compulsory acquisition), minority shareholders have little say in the delisting decision of net net stocks in Singapore.

This is par for the course with any other important decision-making process, such as electing members to a Board or voting to change a failing business strategy. Hence, minority shareholders often face a lot of hurdles if they think that something has gone wrong in the company.

Among the difficulties is the high costs incurred to take legal action against a listed company. Those who have exercised their rights to question the board of the company have also been threatened with defamation suits.

Currently, Singapore relies too much on having either the Monetary Authority of Singapore (MAS) or the Commercial Affairs Department as the only enforcement agent. With inadequate laws to allow independent shareholder activism to come forward, minority shareholders are hamstrung unless they have deep pockets to face the litigation costs.  This is definitely a major issue in investing in net net stocks in Singapore.

SGX recently revised the delisting rules to make them fairer for minority shareholders.

The exchange has studied whether to disallow majority shareholders from voting at EGMs (Emergency General Meetings) that are held to decide on voluntary delisting. Such a practice is implemented in Hong Kong as well.

SGX chose not to implement this rule change in its most recent update on 12 July 2019, but it did rule that a company's exit offer must not only be just reasonable,  but also fair, in the opinion of the appointed independent financial adviser. Previously, there was no such requirement for the offer to be “fair.”

On top of that, SGX has also scrapped the 10 percent requirement for those dissenting the delisting, but has retained the threshold for needed votes at 75 percent.

This is good news for net net stocks Singapore investors!

Nevertheless, there is still more work to be done to protect minorities’ interest.

Net Net Stocks Singapore: What We Can Do Right Now

It is definitely great that management owns shares of the companies — to have skin in the game —  as it boosts investors’ confidence. However, to protect minorities like ourselves when we buy net net stocks in Singapore companies, we need to ensure that management does not hold too many majority shares that will dominate and sway the key decisions of the company.

Minority shareholders (especially active ones) can collectively come together to ask management important, and sometimes tough, questions about the company’s progress as frequently as we can — either during the AGMs or through email correspondence.

This signals to the management that the collective investor community is closely watching them, and this will keep them on their toes in looking after the interests of the small investors.

Bringing this further, we can build a community with more active minority shareholders — hedge funds and law firms that aid in protecting the long-term minority interests in net net stocks in Singapore.

By promoting shareholder activism, we can effectively enable more efficient checks and balances in the companies. This can undoubtedly prevent controlling shareholders from acquiring too much power in the first place and pressure management to make shareholder-friendly decisions.

At Net Net Hunter, we have a community forum of dedicated investors who are readily available to come together to overcome these issues, especially with net net stocks in Singapore.